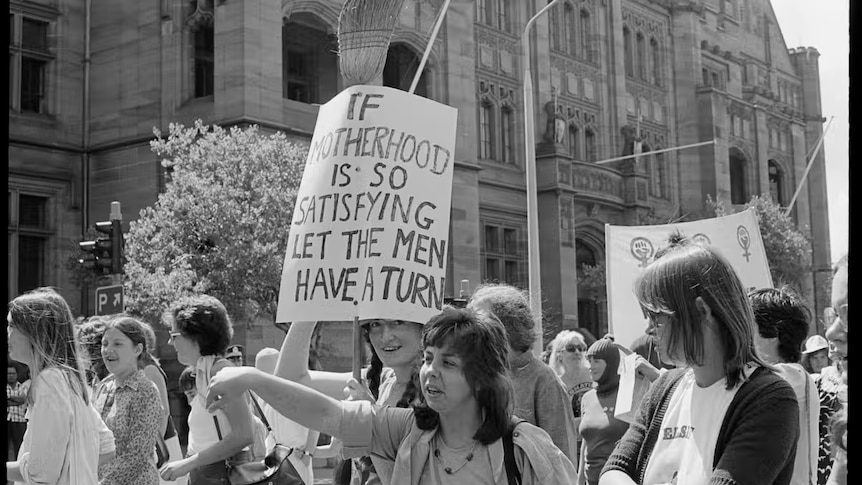 Mother’s Day has long been used for commercial and political gain. Also this year my inbox is full of gift ideas to “make mommy smile”. With federal elections approaching, we can expect candidates to pull out all the stops this weekend to showcase their pro-family credentials.

But advertisers and politicians aren’t the only ones interested in Mother’s Day. The origins of the day lie in feminist campaigns in the late 19th and early 20th centuries to promote peace and greater recognition of the social and economic contribution of women as mothers.

It has been a point of contention for future generations of feminists. This was especially true in the 1970s, when women’s liberation activists questioned prevailing expectations of female domesticity.

According to them, the dominant model of the male breadwinner and the female housewife was an important source of women’s oppression. Many felt that Mother’s Day only exacerbated the problem.

A pamphlet published by Adelaide women’s liberation activists in 1971 claimed that Mother’s Day was little more than an exercise in hypocrisy.

For a day, the pamphlet claimed, society paid lip service to women’s “martyrdom” at home. For the rest of the year, their housework remained invisible and their “basic needs” were not met – including independence from their children.

But it’s worth noting that women’s liberation activists argued that the “cult” of domesticity had serious consequences not only for women, but also for children. On this Mother’s Day it is good to remember that activists are committed to their common liberation.

This view was expressed most explicitly in North American radical feminist Shulamith Firestone’s bestselling book, The Dialectic of Sex: The Case for Feminist Revolution (1970).

The book is now best known for its frank critique of motherhood: Firestone went so far as to describe pregnancy as “barbaric,” advocating assisted reproduction instead.

But The Dialectic of Sex was also notable for Firestone’s analysis of the status of children in the nuclear family and the power parents exercised over them. Mothers played a particularly insidious role, Firestone argued, in children’s psychological education, determining “what they become as adults and the types of relationships they can form.”

Firestone’s views on this subject were far from exceptional. Indeed, the concept of child liberation reverberated through a wide variety of feminist texts of the period.

And as I found when I looked for evidence of the concept’s impact in Australia, it was also put into practice in a variety of ways.

For feminist mothers in the 1970s, access to affordable childcare was a particularly high priority — not only to enable their equal participation in public life, but also because of the benefits to children’s social development and connection outside the family.

Many feminist teachers and mothers were drawn to new approaches that emphasized children’s autonomy and self-direction. These principles also formed the basis for broader child-rearing decisions, such as mothers’ selection of books, toys, and clothes, and their efforts to be more open and honest in answering their children’s questions about sexuality.

When they couldn’t find readily available alternatives, a group in Melbourne even started producing their own. In 1974 they founded the Women’s Movement Children’s Literature Cooperative. Their first book, The Witch of Grange Grove, was typical of characters who ignored gender stereotypes and pursued their own interests.

By the mid-1970s, the issue of domestic violence had become urgent. Children made up more than half of the residents of women’s shelters, such as Elsie in Sydney. In addition to physical and emotional abuse, child sexual abuse – especially by male relatives – was one of the issues often faced by refugee workers, along with activists from rape crisis services.

For many feminists of the time, the liberation of women and children was inseparable.

This was certainly true of the Adelaide activists who protested Mother’s Day in 1971. As their pamphlet stated, women must, both for their own good and so as not to “suffocate” their children. [their] martyrdom” and redefining themselves as “a human being” […] not just ‘mom'”.

But this message was often lost on women’s liberation opponents, who wanted to portray the movement as “anti-mother” and “anti-child” – a stereotype of this era that has persisted.

Internal tensions within women’s liberation have also shaped the feminist and popular memory of this period. While many involved in the movement worked hard to improve the conditions of mothers and their children, not everyone felt that these efforts went far enough.

Some women were alienated by the fierce criticism of motherhood, or felt judged by those who had no children. And while women’s liberation attracted participants from diverse backgrounds, many First Nations and migrant women chose to organize into groups outside of it, in part because of the perception that their experiences of motherhood required different political remedies.

The relationship between 1970s feminism and motherhood was fraught at times. But we mustn’t forget that this ambivalence about motherhood can also be productive and create space for new ways of thinking, not only about women, but also about children.

We continue to struggle with many of the same issues, from childcare and gender socialization to child abuse and domestic violence.

In seeking lasting solutions to these problems, it is worth remembering that there is a longer history of feminist activism that could influence our contemporary approaches – not least when it comes to responding to the predictable clichés that show up every year on Mother’s Day.

Isobelle Barrett Meyering is a researcher at Macquarie University. This piece first appeared on The Conversation.