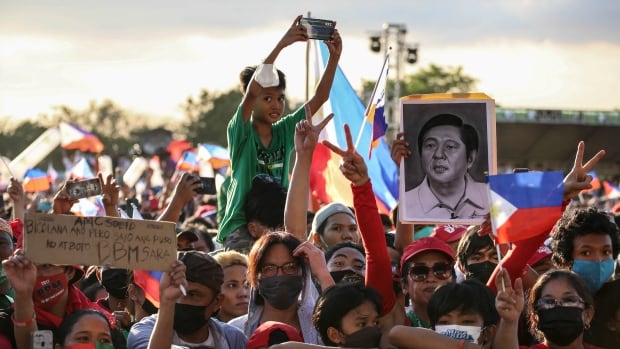 The Philippines has been pulsing with the energy of a major election campaign for months.

It was a lively scene of one massive rally after another during the race, drawing crowds to events more like concerts or street parties in the archipelago.

On Monday, more than 67 million registered voters will vote to decide the country’s next chapter, electing a new president, vice president and 12 senators, as well as 300 MPs and about 18,000 officials, including mayors, governors and local officials. ward councilors.

Many see this election as a turning point with great commitment to the Philippines, which will determine how it is governed and how it recovers from the COVID-19 pandemic.

The outgoing president, Rodrigo Duterte, has been a popular yet polarizing figure, curtailing the free press and violating human rights with his signature ‘war on drugs’ policy.

Human Rights Watch estimate that the hard policy resulted in the deaths of more than 12,000 people, with about 3,000 at the hands of the police.

But Duterte’s supporters believe he has been effective in imposing discipline on the population and curbing crime and corruption.

And in a country with one of the highest poverty rates in the world, poverty alleviation through jobs, health care and education was largely at the center of every candidate’s platform.

Who is the presidential frontrunner?

Although the candidate list contains 10 people, as the campaign ends, it has largely become a two-way race between incumbent Vice President Leni Robredo and Ferdinand (Bongbong) Marcos Jr., a former senator and son of the late dictator Ferdinand Marcos.

The latest polls put Marcos Jr., 64, comfortably in the lead. His running mate, Sara Duterte-Carpio, is the daughter of the current president.

Marcos’s popularity is the result of a major overhaul of his family name, 36 years after Ferdinand Marcos Sr. was ousted by the country’s “people power” revolution after years of brutal dictatorship – an era of corruption and violence.

“Our political system is very undemocratic. I would say there may be more than 2,000 families who have a monopoly on local and national political functions in a country of more than 100 million people.”

In his bid to regain public office, Marcos Jr. “rebuilding the myth of the Marcos era as the golden age of the Philippines, where peace, progress or prosperity reigned,” Coronel said.

“They’ve invested a lot in that, especially in social media,” she says. “They have mainly targeted younger voters – those under 40, who have no memory of martial law or the Marcos regime.”

During the campaign, Marcos foregoed debates and regular media appearances in favor of posting for social media platforms, including TikTok, Facebook and YouTube.

“Social media ahead of the 2022 elections has been instrumental in restoring the Marcos brand,” said Jonathan Ong, a disinformation researcher and associate professor at the University of Massachusetts.

With polls suggesting that 56 percent of voters Marcos would choose, Ong said much of that support is actually for his family’s brand, “which has been altered, refined, whitewashed and sanitized by social media.”

“This is something that didn’t happen during the campaign season, but it’s been a project for six, even seven years,” he said.

What about his challenger?

Leni Robredo, a former human rights lawyer, has built her campaign around countering the Marcos social media machine — and the branding that comes with his political dynasty.

She and her team pride themselves on running a volunteer-driven grassroots campaign, some of which go from house to house to speak directly to voters.

While Robredo, 57, is the incumbent vice president, she has distanced herself from the Duterte administration.

In the Philippines, the president and vice president don’t have to run as a single ticket, and the two rode on different tickets in the 2016 race. When she was elected, she had a separate inauguration from Duterte.

That race was also the first time she faced Marcos Jr., beating him for the vice president position.

Robredo’s supporters see her candidacy as a turning point, where the Philippines could move out of the Duterte era — when the country often made global headlines for the president’s poor human rights record.

In blasphemous speeches, Duterte often bragged about ordering the murders of accused drug dealers without due process.

Robredo, on the other hand, has pledged to uphold the human rights of the country’s citizens.

It’s a message that resonates with activist Julie Jamora, who has organized foreign Filipino voters in the US. She is also the National Secretary General of Malaya Movement USA, which Robredo has supported.

“We have a real interest in what happens in the elections and what will determine the course of the next six years,” Jamora said.

She said the past six years under Duterte have been marked by “massive human rights violations, militarized COVID responses and … the decline of democratic spaces.”

Who are the other candidates?

Some of the other candidates in the election have made the run-up to the vote exciting for Filipinos, including celebrity and world champion boxer Manny Pacquiao.

Although his numbers show him trailing in the polls, Pacquiao is a household name in the Philippines and around the world. He won a senate seat in the country in 2016.

The personal story of Pacquiao is a well-known lore: he rose from abject poverty and became one of the richest people in the country.

In interviews and at campaign rallies, Pacquiao has said he is committed to serving the same communities where he started, aiming to lift them out of poverty through jobs, health care and education.

The Philippines’ next president will face a long list of issues that could shape the country’s future for years to come: rebuilding the economy after the pandemic wiped out millions of jobs, mapping a foreign policy amid territorial threats from China and future-proofing looming crises, such as climate change.

For Coronel, who will be in the Philippines to witness the results, this election is about a fledgling democracy that hasn’t quite found its way yet. The vote comes just three decades after the country’s presidential palace was stormed over a dictator.

“I was just outside the palace gates when Marcos fled the country. So I want to see this whole arc of this whole story,” she said.

“That [last] 36 years have been years of dysfunction and corruption – people are getting poorer, there is growing inequality,” says Coronel.

“I think this election is about litigating democracy, and whether it’s still a meaningful project for Filipinos to support.”

The son of deposed dictator Ferdinand Marcos leads the polls ahead of the Philippine elections. The family’s controversial history has been cleared up by a social media campaign that saw Bong Bong Marcos Jr. leads a colorful list of candidates, including Rodrigo Duterte, who is no longer allowed to run. 5:06