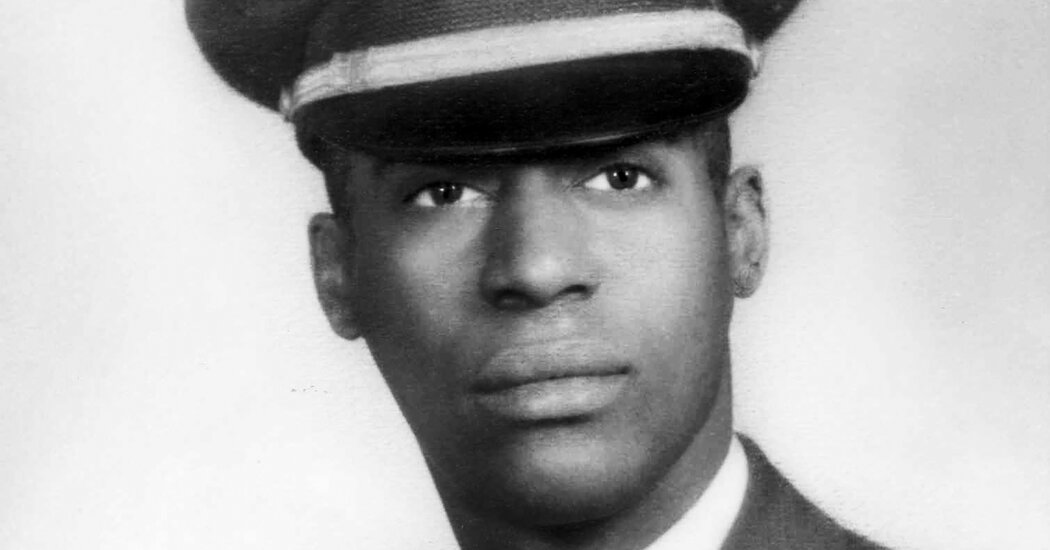 A main street in New York City’s only military post now bears the name of a black officer who died saving others in Vietnam — rather than the name of the Confederate general who led the attempted secession from the South.

The street was renamed John Warren Avenue Friday in honor of First Lt. John Earl Warren Jr., a Brooklynite who was just 22 when he threw himself on a grenade to save three men in his platoon. He was posthumously awarded the Medal of Honor, the nation’s highest military award, for his bravery. It was named “General Lee Avenue” after Robert E. Lee, who served at the base 20 years before the Civil War.

The new name was unveiled at a ceremony at the base, Fort Hamilton, on the Brooklyn side of the Verrazzano-Narrows Bridge. The change came after years of urging by local officials who picked up steam amid the nationwide outcry over the murder of George Floyd by police in Minneapolis two years ago.

Colonel Craig A. Martin, commander of the garrison, said he had wanted to change the name since he began his stint at Fort Hamilton in July 2020. The street is a main artery extending from the visitor’s entrance to the other side of the base.

“If we indeed want to be leaders in the military and say we are people first and make a difference, we need to take action,” Colonel Martin said. “We can’t just talk. We have to make a difference.”

Colonel Martin said he was struck by Lieutenant Warren’s bravery, as well as by a strange coincidence: he was born the day the young lieutenant was killed.

“John Warren died so others could live,” he said.

Other name changes may follow shortly. The Naming Commission, created by Congress last year, is tasked with recommending new names for nine Department of Defense posts commemorating Confederate officers, including Fort Bragg in North Carolina and Fort Hood in Texas. The law instructs the Secretary of Defense to implement a plan by 2024 based on the commission’s recommendations.

Yvette K. Bourcicot, the Army’s acting assistant secretary for manpower and reserves, said Lieutenant Warren’s story was one of “an ordinary man of extraordinary courage.”

Lieutenant Warren grew up on Union Street, where he was raised by his parents, Lillian Warren, a transportation officer, and John Warren, a veteran who worked in the maintenance of a nursing home.

“He never forgot,” Ms. Warren-Baskin said in an interview before the ceremony. “Every time it’s my birthday, I greet him too.”

Ms. Warren-Baskin, a retired union secretary, burst into tears as she recalled the impact the loss had on her close-knit family.

They had attended Brown Memorial Baptist Church in Clinton Hill, as she still does, and her brother enjoyed church activities, dancing, and bowling. He was a serious and outgoing young man, she said.

He was a student at Brooklyn College when he was drafted into the military. He tried to make the most of it by enrolling in an officer’s school and a leadership course. She remembers accompanying him to the airport when he was deployed to Vietnam in 1968.

“I told him, ‘Don’t be a hero,'” she recalls. “But he never looked back at us. He just kept going, and years later I thought about it; did he know he wouldn’t come back home?”

He led a platoon that came under heavy fire on January 14, 1969. As his men advanced towards an enemy position, a grenade landed in the middle of their group.

He fell toward the grenade and was killed, protecting at least three men from injury or death, according to his Medal of Honor citation.

“First Lieutenant Warren’s ultimate act of sacrifice to save the lives of his men was in accordance with the highest traditions of military service,” it read.

Ms. Warren-Baskin and her parents traveled to Washington in 1970 to receive the award from President Richard Nixon. The medal is now part of the collection of the Smithsonian National Museum of African American History and Culture.

Ms. Warren-Baskin said she was “ecstatic” to hear about the renaming in her hometown. Many relatives and friends joined her at the ceremony on Friday.

“It’s an honor to have a street sign with his name on it here at Fort Hamilton Army Base, in Brooklyn, his home, with Army personnel and their relatives and retirees walking down John Warren Avenue,” said Ms. Warren Baskin.

“I hope they take the time to look up his name and know that he deserves this honor, that he sacrificed his life to save three of his army men.”

James Hendon, commissioner of the New York City Department of Veterans’ Services, said not many military assets have been named after Vietnam veterans. About 2.7 million Americans served in Vietnam and more than 58,000 were killed.

Ceremonies like Friday’s ensure “that those people are not forgotten,” he said.

In the coming weeks, the base will also remove the name of Stonewall Jackson, another Confederate general, from a separate street. It has already been co-named Washington Drive, and will remain that name, said Connie M. Dillon, a spokeswoman for the post.

Across the country, at least 230 Confederate symbols in public places have been removed, moved or renamed in recent years, though thousands remain, mostly in the South.

New York officials had called on Fort Hamilton to remove Lee and Jackson’s names in 2017 after neo-Nazis and right-wing militias marched in Charlottesville, Virginia. At the time, the military had said this would be “controversial and divisive”.

City Councilman Justin Brannan, who represents the area around the base and was one of the officials pushing for the change, applauded the military’s reversal.

“Not only did Robert E. Lee lead some of the Confederacy’s most sweeping victories in their struggle to protect slavery; he was also a traitor to his own country,” said Mr. brannan.

“I can’t think of a better antidote than to rename this street in honor of John Earl Warren Jr., a Brooklyn-born hero.”