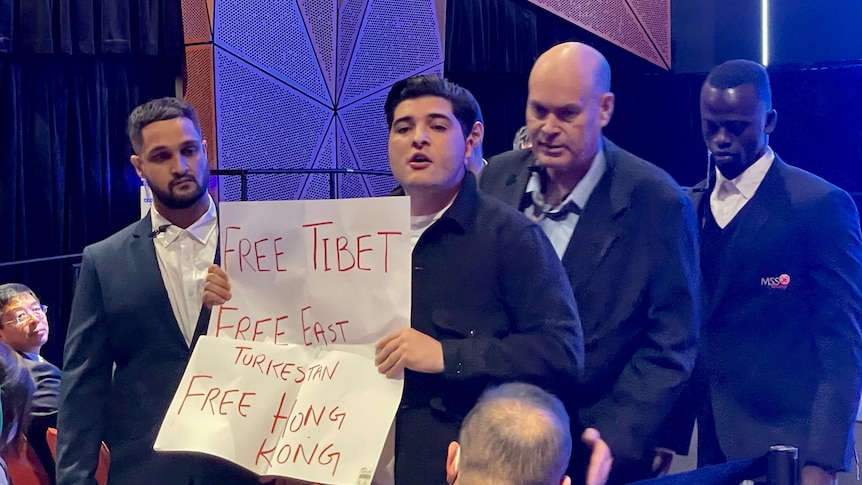 Protesters caused multiple disruptions during a speech in Sydney by China’s Ambassador to Australia, Xiao Qian.

The ambassador appointed earlier this year started talking about how to improve ties between the two countries when he was interrupted by successive protesters.

One protester described Mr Xiao as a “representative of a dictatorship” and accused the Chinese government of committing genocide against Uyghur Muslims in Xinjiang.

He was led out by guards.

A man was asked to leave the venue prior to the event because he was dressed in a Cultural Revolution-era military suit described by security as “confrontational.”

Another protester held a sign that read “Free Tibet”.

Yet another was escorted outside after he stood up and criticized China’s censorship and said people in Hong Kong and Tibet could not freely express their views.

The speech was widely seen as an attempt to thaw frosty relations between the two countries, in the wake of trade sanctions and a recent “dangerous” encounter between a Chinese fighter jet and an Australian maritime surveillance plane over the South China Sea.

“How can we keep up the momentum and get our relationship back on track,” Xiao told the audience.

“This relationship is of mutual benefit,” he said, saying the “policy of friendly cooperation” remained unchanged.

But he added that the relationship had been “difficult” in recent years.

“There are undeniably certain areas where China and Australia have different views. These are the areas where we need to continue to have a constructive dialogue.”