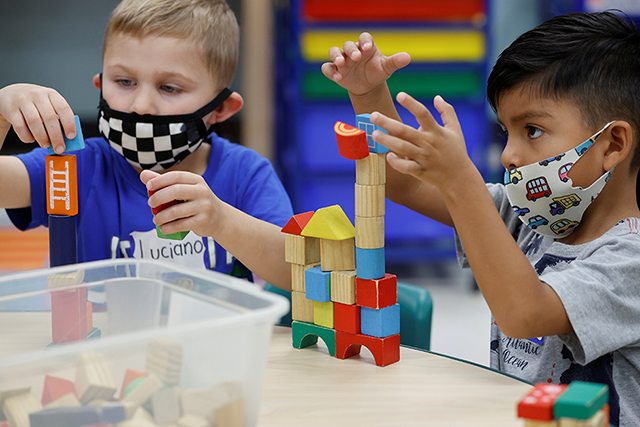 Minnesota has an enviable problem: how to spend a $9.25 billion fortune, the latest and largest in a decade-long run of state budget surpluses.

While the governor, a Democratic House and a Republican Senate bicker and bicker over what to do with that windfall, 80 percent of preschoolers living in poverty are yet to become a footnote in government spending on education.

This neglect must end. Utilities.

The $70 million in state money set aside for early childhood scholarships hasn’t changed in four years. Nor is the bleak outlook for 31,000 underprivileged children left behind by a state initiative too poorly funded to help every child in need.

It’s time for the state to double this year on early childhood education and, after measurable results show what that spending can achieve, double spending on underprivileged children again in the next biennial budget.

Study after study shows that children, from birth to age 4, who are enrolled in quality early childhood education are less likely to drop out of school or break the law, and are more likely to be healthier and end up as trustworthy taxpayers with stable families.

If the governor and legislature can’t agree on a surplus plan by midnight on May 22, the state will abandon tens of thousands of children who can’t wait another year to get a head start in education — and in life.

Investing in those children is the best long-term investment the state can make, with an estimated return of 16 percent — much higher than competing claims on government money.

The improved school results for young children aged 3 and 4 are sustainable and well established.

But preparing underprivileged children for school — to learn to learn — needs to start even earlier, with prenatal visits and recruiting parents to care for their children from birth to their earliest years.

The latest research, published earlier this year, indicates that an enriched environment can literally bring important areas of the developing brain to life.

I recently moderated a panel that illustrated the promise and stimulated even the youngest of minds. The session was sponsored by the Heller-Hurwicz Economics Institute at the University of Minnesota, a think tank dedicated to turning research into public policy tools.

Money can be a key element in changing the fate of the youngest living in poverty. An experiment, which has already spent $5 million on donations from foundations and private donors, has provided fascinating evidence of how the maturity of infants’ brains is affected by family income.

Using electronic imaging of the brain activity of 435 healthy year-olds of low-income parents in Minneapolis-St. Paul, Omaha, New York City and New Orleans, the study is in its fourth year.

In a random lottery, the mostly black and Latina mothers with an average income of about $20,000 were divided into two groups. One receives a monthly cash gift of $333. The other a token $20 per month.

The experiment, which started in June 2019, will continue with unconditional payments to mothers until the children are four years and four months old.

The study started with a simple premise, according to Katherine Magnuson, director of the Institute for Research on Poverty at the University of Wisconsin-Madison.

She said researchers started with “a hypothesis that because our brains are ready to be influenced by our experiences, and because the experiences can vary so widely by parental income and economic resources, you might think there’s a chance is that poverty and related early hardship will affect brain development in ways…that don’t prime children for success in school.”

The results visibly confirmed that idea.

Electronic scans, interpreted by neuroscientists, showed that children’s brains were literally lit up in areas related to cognition. That is, if their mothers had gained 20 percent more household income from the $333 monthly checks.

Meanwhile, the electrical activity of the same parts of the brain was muted for children in the families who received just $20 a month.

In fact, kids whose families got an economic boost also got an improvement in brain development, Magnuson said.

“It’s the idea that even before you can really reliably assess cognitive development by figuring out how many numbers or words they know, what colors they understand, you can look at their brain activity and potentially get a glimpse of what’s to come,” she said. †

Let’s wake up the brainwaves of Minnesota’s political leaders with a call to action.

Improving the future of children living in poverty is feasible. Let’s do it.

Art Rolnick is a board member of the Heller-Hurwicz Economics Institute and retired director of research at the Federal Reserve Bank of Minneapolis.