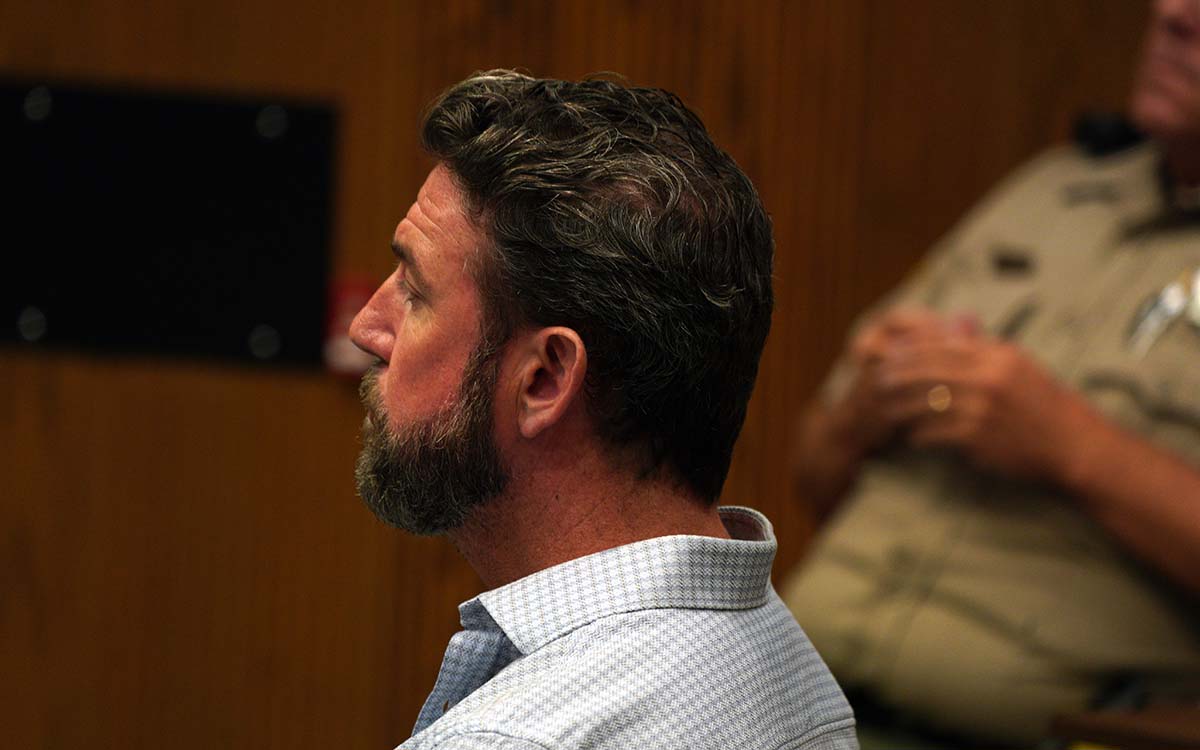 Former Representative Duncan D. Hunter has failed to pay child and spousal support during a “permanent vacation” to Poland and back this year, his estranged wife told a court on Thursday.

“He does not have [sent] a dime since April — not even $25 or any aid payment, and I think he should have done something,” Margaret Hunter told Judge CJ Mody in the El Cajon family court.

The disgraced former GOP legislator, unemployed since January, traveled to Poland to “help make … connections” and to find a “kind of work through those relationships there,” said Leslie Abrigo, a Chula Vista family law attorney.

She also said Hunter, a Navy veteran, is now considering using the GI Bill to get his contractor license — a return to his pre-Congress job.

In the end, Mody Hunter granted his requested “downward amendment” to his support payments based on the DissoMaster computer program and court guidelines.

As of July 1, he must send Margaret $1,038 a month in child support (for 15-year-old daughter Sarah, who lives with her mother in La Mesa) and $323 a month in spousal support.

Hunter, 45, was sentenced a year ago to pay $2,212 in monthly child support and $1,743 in child support. But with Duncan losing his full-time job in January and Margaret now claiming $3,175 in gross monthly wages, the judge has adjusted the payments.

Mody also ordered the couple, who have been separated since September 2019 amid their corruption scandal, to split Sarah’s healthcare costs 50-50. He is also required to submit weekly reports to Margaret, 47, showing that he has made at least 10 contacts for possible employment.

A half-day trial was scheduled for January 31, 2023 to decide how to split any disputed debt and assets, including a 5% timeshare and retirement account. But Margaret seemed open to private mediation — which would avoid a public trial.

Margaret called the hearing at the El Cajon courthouse, but did not make herself visible on a Microsoft Teams screen. Duncan sat with his attorney in the quiet courtroom on the second floor with only court staff and a single news reporter.

Neither side, or the judge, spoke a word about Hunter’s six-year congressional career — which ended after he and his wife pleaded guilty to rampant misuse of campaign donor money. (They were later pardoned by then-President Trump, saving Duncan 11 months in prison.)

But details about their recent lives have escaped.

Duncan Hunter said he has lived rent-free with his parents on their 4,000-square-foot estate in the Alps since his divorce. He described his quarters: a single room with a bathroom, without a living room or kitchen, in his “wing” of the house with 5 bedrooms and 6 bathrooms (with an adjacent rented accessory house with 3 bedrooms).

Mody asked him the “reasonable rental value” of the entire home of former Congressman Duncan Lee Hunter and his wife, Lynne.

“I have no idea, Your Honor,” Hunter said.

In lieu of rent, Hunter said he helps out with odd jobs on his parents’ 3-acre property — 30 to 40 hours in total this year. He quoted “dirt work, sewage work, water work, landscaping. Clean up, fix.”

Margaret, whose maiden name is Jankowski from her native Poland, said she has worked as a CNA – a certified nursing assistant.

“I have two years in college (credit) that don’t count anymore — it’s been too long,” she said. “I was supposed to start school on July 5 and I can’t physically because the schedule just doesn’t work with a full-time job. … Being a CNA is not an option for me for the next 15 years.”

Attorney Abrigo said Hunter hoped to be employed soon while taking out loans to pay alimony and bills. His parents lent him “several thousand” this year, the court was told.

Judge Mody said this “leaves the court with questions as to whether these are, in fact, loans or gifts to Mr. Hunter.”

Margaret, acting as her own attorney, had questions of her own.

“I’m a little confused about the money he’s getting. I wasn’t aware… about unemployment insurance,” she said. Hunter revealed that he received $1,620 a month in unemployment benefits from the state.

Margaret said his spring trip to “a third world country” helped him increase his income.

“He can live very comfortably on the money he received for a month,” said Margaret. But she wondered why he would leave America with a military disability (that was not specified).

“I would think he would want to stay at home comfortably and not travel to a war zone,” she said. … It looks like he is … permanently on vacation … and I think some of the details in his expense report are questionable to me.”

With the exception of a “lump sum” earlier this year, “Margaret stopped receiving money in mid-January,” she said.

Mody tried to dig deeper into their respective tax obligations. But Margaret and Duncan both said they have not filed taxes for 2021 yet – after applying for an extension.

“In September 2019, I had no option but to get an apartment,” she said, noting that “all our pets” live with her, along with Sarah. (Two other children, a son and a daughter, have left home.)

Margaret, who had moved to America from Poland with her family, met Granite Hills High School junior Hunter on election night 1992 through his father’s congressional office, where she volunteered. They got married in 1998.

In court, they just called each other “Miss Hunter” and “Mr. Hunter.” The same goes for Mody, who eschews the traditional honorific of “Congressman Hunter.”

Mody noted that Margaret filed her dissolution request on November 20, 2020.

“We are quickly approaching the two-year mark on this case,” he said, “and this case has yet to be resolved or reviewed.”