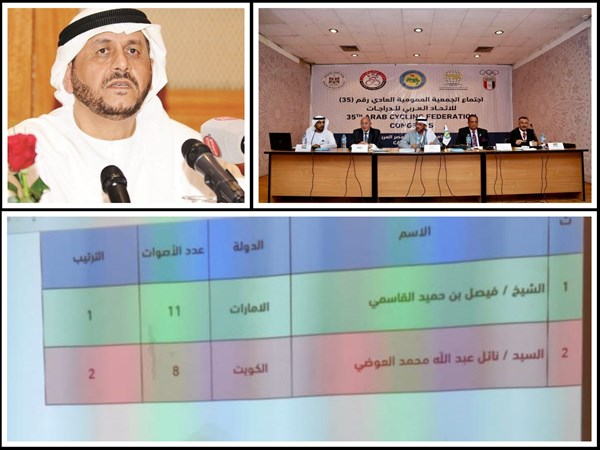 Sheikh Faisal bin Humaid Al Qasimi retained the presidency of the Arab Cycling Federation for another term, which will last until 2024, after winning the elections that took place on the sidelines of the General Assembly of the Federation, which was held at the headquarters of the Egyptian Olympic Committee, in which he received 11 votes against 8 votes for his Kuwaiti competitor, Nael Al-Awadi.
Sheikh Faisal bin Humaid had assumed the presidency of the Arab Union in 1997 and moved its headquarters to the Emirates in 2003, and in recent years had succeeded in bringing about a global shift in the game by link to the international agenda, contribute to the development of the game and participate in new competitions, as well as interest in developing technical and administrative frameworks of coaches and referees.
“Recommendation” determined the two vice president seats, for Dr. Muhammad Wajih Azzam, President of the Egyptian Federation, and Abdullah Al-Wathlan, President of the Saudi Federation, while 6 personalities out of 10 candidates won the membership, namely Noureddine Al-Triki, President of the Libyan Federation, Khaled Kokash, President of the Syrian Federation, and Fawzi Lossif The Secretary General of the Algerian Federation, Saif Al-Rashidi, President of the Omani Federation, Mohamed Katim, Vice-President of the Moroccan University, Nawfal El Marshawy, President of the Tunisian University, in addition to the seat of the Palestinian Federation, which is occupied by Mohamed Said Tamraz, Vice-President of the Federation.
Leaving behind the race of members Al-Hashush, the head of the Jordanian federation, Muhammad Al-Aidarous, the president of the Yemeni federation, Fitch Zadorian, the head of the Lebanese federation, and Mahmoud Aziz, the head of the Iraqi federation .
The new union’s board of directors elects the female member at its first meeting and nominates Syrian Zainab Amin Bilal and Jordanian Lubna Jamal Al-Smadi for the position.
It is noteworthy that the Arab Cycling Federation was founded in 1975 under the umbrella of the Union of Arab National Olympic Committees and strives to bring the level of the Arab bicycle to the best ranks. And for 47 years, the presidency of the Arab Union succeeded three presidents, starting with Prince Bandar bin Abdul Rahman bin Abdulaziz, and then assigned to Dr. Khalid bin Ibrahim Al-Turki, then Sheikh Faisal bin Humaid Al Qasimi assumed the presidency from June 1997 until now, and the Union headquarters was In the capital Riyadh, he moved to Cairo and then to the Emirates, with his current headquarters in Sharjah.