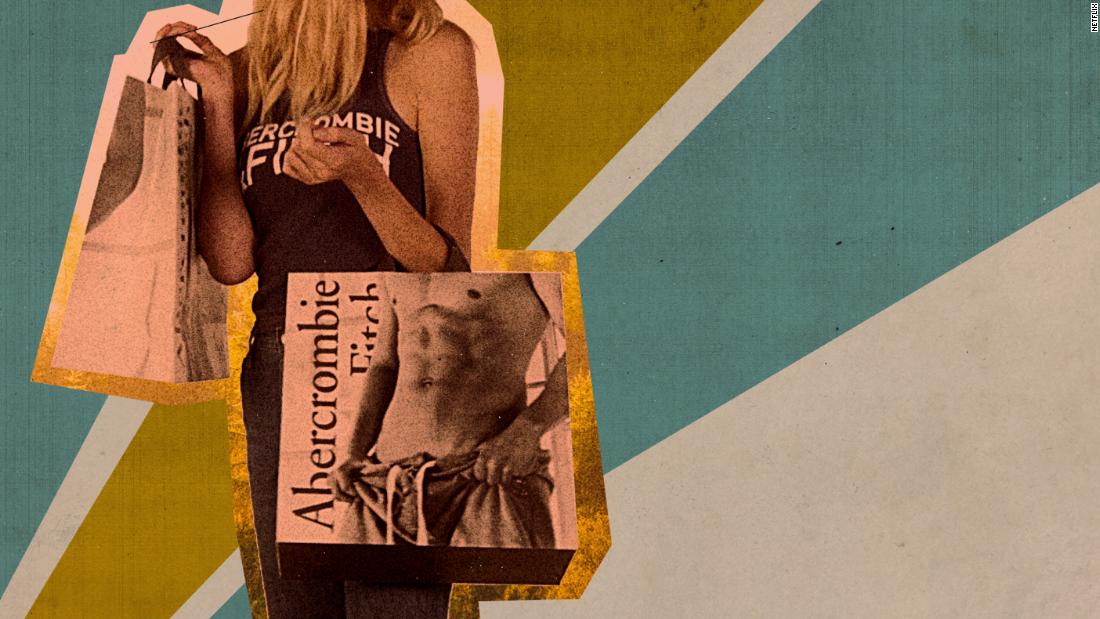 The Abercrombie & Fitch website is full of Gen-Z-friendly nods to diversity and inclusion these days. There are people of color, sizes up to 3XL and even a Pride-themed collection with “gender inclusive” rainbow tees. The brand’s Instagram account, meanwhile, proudly promotes models in wheelchairs, body positivity stories and displays of LGBTQ solidarity.

But barely disguised in the label’s new tagline, “This is #AbercrombieToday,” is an acknowledgment that there was a yesterday we’d rather forget.

Any chance of that has been effectively thwarted by the new Netflix documentary “White Hot: The Rise & Fall of Abercrombie & Fitch,” which charts Abercrombie’s transformation from a forgotten 19th-century outdoor store to the epitome of late-’90s teen fashion. brings. Through interviews with former models, recruiters, store clerks and executives, the 88-minute film suggests that appearing cool, attractive, and white wasn’t just an exercise in branding: it was an active business strategy at the expense of non-white employees and consumers.

Despite all the current messages about inclusion, millennials (and older) will remember a very different Abercrombie — one that took over malls and billboards with an army of attractive models and ripped male torsos. One that spread across college campuses and was mentioned in LFO’s 1999 anthem “Summer Girls” (“I like girls that wear Abercrombie & Fitch,” the band’s late vocalist Rich Cronin sang. “I’d take her if I had one. wished”).

As Robin Givhan, the Washington Post’s senior critic points out in the documentary, Abercrombie’s explosive success was achieved by combining Calvin Klein’s sex appeal and Ralph Lauren’s elite preppiness—but at prices more affordable than both.

At the time, it seemed that the brand could do little wrong. A former merchandiser recalls a co-worker telling him they could write “Abercrombie & Fitch” with dog poop and put that on a baseball cap and sell it for $40.” One of the brand’s former models put it even more succinctly: “If you weren’t wearing Abercrombie, you weren’t cool.”

But behind the aura of exclusivity was a policy of, well, exclusivity. In a precursor to today’s influencer marketing, the label preyed on handsome employees and looked to sororities and sororities for models and retail staff — a cool-kids-only strategy backed by a tacit understanding of whose appearance qualifies as “all- American.” Former staff members reveal internal guidelines that just aren’t racially explicit, though descriptions of dreadlocks as “unacceptable,” for example, made the implications clear enough for one ex-recruiter, who says, “It wasn’t not racist.”

The company declined to comment on specific allegations in the documentary, although current CEO Fran Horowitz told CNN in a statement, “We own and confirm there were egregious and inappropriate actions under former leadership,” adding that the company is now “a place of belonging.”

“We have evolved the organization, including making management changes, prioritizing representation, implementing new policies, overhauling our shopping experiences and updating the fit, size and style of our products. ” she said.

Models from Abercrombie & Fitch at the opening of the brand’s store on 5th Avenue in New York. Credit: David Pomponio/FilmMagic/Getty Images

‘Are we excluded? Absolute’

The company faced allegations of misconduct at the turn of the millennium. In 2003, a group of former employees and job applicants sued Abercrombie & Fitch for discrimination. Several of the accusers appear in the Netflix documentary to reiterate longstanding claims that black, Asian-American and Hispanic workers were forced to work shorter hours, were fired or forced into backrooms because of their appearance.

Abercrombie settled the lawsuit in 2004, paying approximately $40 million to his accusers. And while the company never pleaded guilty in the case, it did agree to a non-binding consent decree in which a court oversaw improvements in its recruiting, recruiting and marketing practices. While there were clear improvements in diversity on Abercrombie’s store floors, the company would later face the Supreme Court after a Muslim American woman, Samantha Elauf, alleged she refused a job in 2008 because she wore a headscarf. The court ruled 8-1 in her favor.

Samantha Elauf outside the US Supreme Court, which voted in her favor in a case alleging that Abercrombie & Fitch violated discrimination laws by not hiring her for wearing a headscarf, a symbol of her Muslim faith. Credit: Chip Somodevilla/Getty Images

The documentary also traces back to other disturbing parts of Abercrombie’s success story, including its close relationship with fashion photographer Bruce Weber, who has since been accused of sexual misconduct by countless models. (Weber has always denied the allegations, telling the New York Times in 2017 that he “never touched anyone inappropriately.”) Other decisions now unthinkable include insulting T-shirts with stereotypical Asian fonts and caricatures, including one featuring the fictional Wong. Brothers Laundry Service and its slogan “Two Wongs Can Make it White.”

What’s shocking about the documentary, however, isn’t just the nature of the allegations — many of which have long been in the public domain — but also how long it took for a settlement to arrive.

Abercrombie made no secret of the fact that he wanted his clothes to be worn by people who looked a certain way. In 2006, former CEO Mike Jeffries effectively laid out his tactics in a now infamous profile on the Salon news site, saying, “We’re going after the attractive, all-American kid with a great disposition and lots of friends. A lot of people don’t belong (in our clothes), and they can’t belong. Are we excluded? Absolutely.”

The comments then went almost unnoticed. It would be well into the next decade before Jeffries’ quote — and the brand’s history of problematic marketing and advertising — became more of a corporate liability. But when a young and socially conscious generation of customers noticed, the floodgates opened.

In 2013, Benjamin O’Keefe, a teenager who survived an eating disorder, started a Change.org petition, signed by nearly 80,000 people, urging the label to offer sizes XL and larger. That same year, filmmaker Greg Karber went viral with his #FitchTheHomeless campaign and video, in which he donated Abercrombie clothing to the homeless in response to Jeffries’s exclusionary approach. Plus-size blogger Jes Baker created a series of inclusive spoof ads that changed the brand’s logo to “Attractive & Fat.”

The following year, Jeffries stepped down as CEO amid declining sales, paving the way for another rebranding exercise. But like several other documentaries that revisit disturbing elements from our not-too-distant past, “White Hot: The Rise & Fall of Abercrombie & Fitch” is less of an exposition of what happened under his leadership and more a reflection on what we as a society Allowed to happen. As the Asian-American students who protested the “Wong Brothers” t-shirts in 2002 would attest, objections to the brand’s behavior have always existed — only someone has finally stopped to look at them. listen.

“There were probably as many people as now who hated what we were doing, who were completely offended, who felt disengaged, who felt disregarded,” one ex-employee recalled near the end of the interview. documentary. † “But they didn’t have the platform to express it and now they have.”