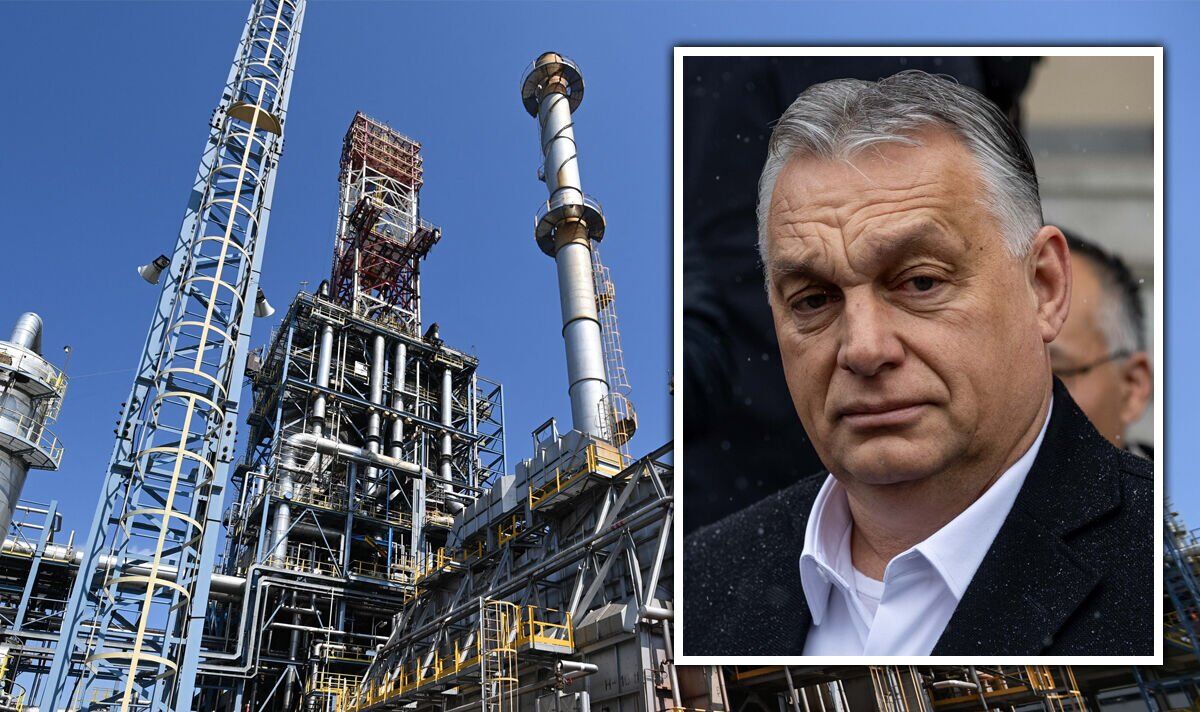 Since the start of Russia’s ‘special military operation’ in Ukraine, the EU has strongly condemned Moscow and supported Kiev with weapons and funds. However, as the EU looks set to implement an oil embargo on Russia, Hungary has warned that a blanket ban could be an economic “atomic bomb”.

Mr Orban urged on Friday that Hungary would not support a new round of proposed EU sanctions against Russia if they included a ban on Russian oil exports.

He said: “We cannot accept a proposal that ignores this circumstance, because in its current form it is equivalent to an atomic bomb dropped on the Hungarian economy.”

The Hungarian leader’s decision was not welcomed by Belgian politician Guy Verhofstadt, who was the leader of the Alliance of Liberals and Democrats for Europe from 2009 to 2019.

“His blackmail makes the EU dysfunctional, a gift to the killers in the Kremlin. Time for reform, time to end unanimity in EUCO.”

Viktor Orban has been defended over claims he is ‘Putin’s puppet’ (Image: GETTY)

He told the broadcaster: “The Hungarians, Viktor Orban, a closet runner and less good friend of Putin, have indicated that he is not for the package yet unless there is some protection for Hungary, which does get a lot of oil from Russia.

“But it does require unanimous consent from the 27 members of the EU.

“But the fact is that we will not end this conflict until Putin is starved of oil and gas revenues, so one way or another we must continue to ramp up these sanctions.”

Demko noted sanctions against Russian oil ‘will be painful for Hungary’ and other EU states (Image: EXPRESS)

He wrote for Spiked: “The Hungarian president, prime minister and parliament have condemned the Russian invasion of Ukraine as an unprovoked, barbaric attack on a sovereign country.

“They have also condemned the alleged war crimes committed by Russian troops. Does this sound like a country that is too close to Russia?

“Hungary has clearly sided with Ukraine. More than 600,000 refugees were welcomed with open hearts in a country of less than 10 million inhabitants.

“According to the UN, more than 100,000 Ukrainian refugees have remained in Hungary. To put that in perspective, it would equate to four million refugees entering the UK and 700,000 staying.”

Royal Family LIVE: Kate on the hunt for a personal assistant

Expert insists ‘Pigeons were war heroes’ because of poo problem

Demko warned sanctions ‘could free Russia to be even more destructive in Ukraine’ (Image: EXPRESS)

Demko noted that Hungary is not “as robust on sanctions against Russia as the UK or some other EU member states”, but stressed that sanctions from the bloc “will be painful for Hungary”.

He noted that the country “has already voted for five rounds of EU sanctions”, and said Slovakia and other EU countries will also “suffer” from the bloc’s total oil ban.

Demko then said that “the loss of oil exports to Hungary would mean next to nothing for Russia” and would “seriously damage the Hungarian economy”.

The expert also questioned whether sanctions will “liberate Russia to be even more destructive in Ukraine” as oil and energy continue to pass through Kiev.

He then said: “Hungary, as a neighbor and as a member of both NATO and the EU, stands behind Ukraine.

But wishing reality away would only serve the hardliners of Moscow. And an economically weakened Central Europe could help Ukraine much less.”

EU revised its embargo to allow Hungary to use Russian oil until 2024 (Image: EXPRESS)

European Commission President Ursula von der Leyen said at a conference organized by the German newspaper Frankfurter Allgemeine Zeitung that it is “not easy to achieve unity” over the planned oil embargo.

EU sources told Reuters the EU commission had modified its proposal for an oil embargo to allay member states’ concerns.

The amended plan would reportedly allow Hungary and Slovakia to continue importing Russian oil until the end of 2024.

The original proposal would have halted imports of Russian oil into the EU within six months and refined oil products by the end of 2022.