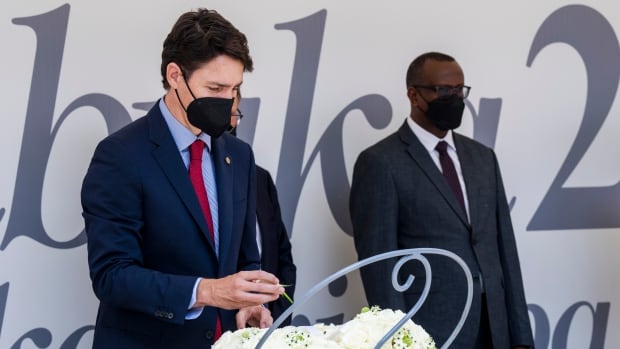 It was a visit of great political and perhaps even personal significance, as Prime Minister Justin Trudeau laid a wreath at the Kigali Genocide Memorial in Rwanda on Thursday.

The site contains the remains of more than 250,000 Rwandan Tutsis massacred by Hutu extremists in the spring and summer of 1994.

Former Canadian General – later Liberal Senator – Romeo Dallaire, who was an early supporter of Trudeau, led the peacekeeping mission that failed to prevent the genocide.

More than 800,000 Tutsis across the country were killed in the organized campaign that spanned 100 days.

The Prime Minister paid his respects when Commonwealth leaders met in Kigali to discuss, among other things, human rights and the growing food insecurity on the African continent.

On Thursday, Trudeau announced that Canada would contribute an additional $250 million to the United Nations World Food Program, on top of the $500 million already earmarked. It will likely be welcome news among African Commonwealth leaders, especially in light of a recent International Monetary Fund report this spring that warned that rising fuel and food prices will lead to instability in Africa.

The genocide memorial of Rwanda contains not only the remains of victims, but also photos and personal items.

Trudeau was greeted by the center’s executive director and had the opportunity to speak with a genocide survivor.

“What happened 28 years ago here in Rwanda not only resonates every day for Rwandans, but also resonates around the world as something we should all be vigilant about,” Trudeau told reporters. “We all need to be there, to make sure the road is never crossed again, anywhere in the world.”

Prince Charles and his wife Camilla visited the site on Wednesday.

After also laying a wreath, Charles – the first member of the royal family to visit the country – met Rwandan President Paul Kagame, who played a key role in the military victory that ended the genocide.

Trudeau was scheduled to meet with Kagame separately on Thursday, but the bilateral meeting was postponed until later in the Commonwealth meeting.

Human rights groups have long criticized Rwanda’s choice to host the Commonwealth meeting, citing Kagame’s restrictions on press freedom, the arrests of high-profile critics and allegations that authorities have failed to conduct credible investigations into cases of enforced disappearances. and suspected deaths of opponents of the government.

Rwanda — a former German and then Belgian colony — was admitted to the Commonwealth in 2009 over objections raised by the Commonwealth Human Rights Initiative and Human Rights Watch, which recently noted that Kagame’s government is arbitrarily detaining homeless people and other vulnerable populations in Kigali prior to major international conferences, such as the Commonwealth Leaders’ Meeting.

The organization interviewed 17 individuals who claimed to have been detained without charge last year as part of its effort to clean up the streets of the capital.

Trudeau said that talking about human rights always comes up in his conversations with world leaders.

“I will, as always, remain honest and direct about how to ensure we continue to support everyone’s rights,” he said, noting that there are other Commonwealth countries that have poor records of protecting LGBTQ people. rights.

“The Commonwealth is a place where there are people and leaders who don’t go as far as we would like on human rights,” Trudeau said. “For example, the number of Caribbean friends of ours, who are still criminalizing LGBTQ rights and not taking enough steps forward. Rwanda is taking better steps in this than many of the other partners.”

Foreign Minister Mélanie Joly announced on Wednesday that Canada would upgrade its diplomatic mission in Kigali to a full embassy and high commissioner. An ambassador will also be appointed to the African Union.

“What is happening here in Rwanda is the future of Africa – and we know that Rwanda is leading the way and Rwanda is making progress,” said Joly, a Commonwealth member.