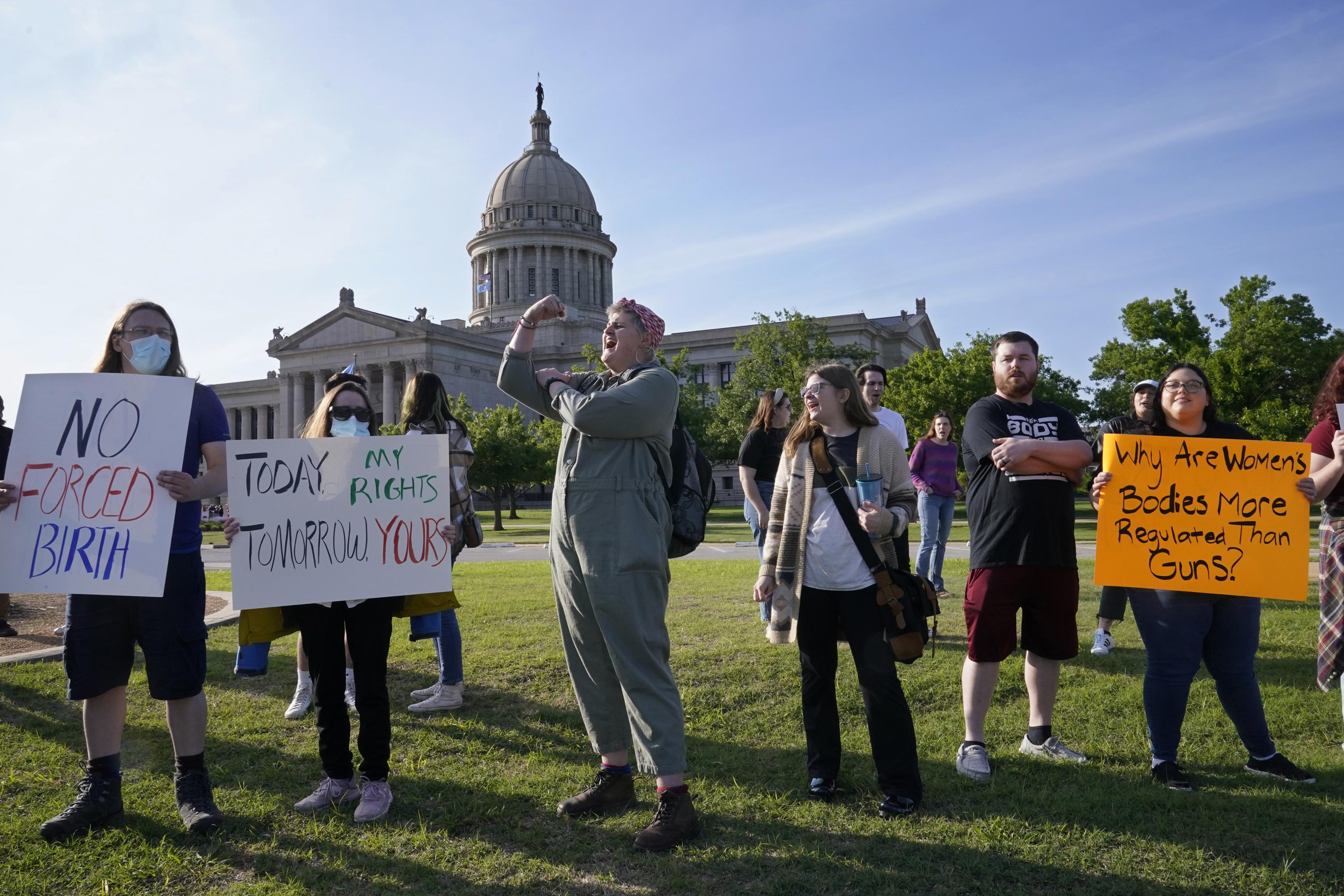 BOISE, Idaho (AP) – Angela Housley was halfway through her pregnancy when she learned that the fetus was developing without parts of its brain and skull and would likely die within hours or days of birth, if it survived that long.

The news came during her 20 week ultrasound.

“The technician got a horrible look on her face,” Housley said. “And we got the really sad news that our baby was anencephalic.”

It was 1992 and abortion was legal in Idaho, although after the procedure she had to dodge anti-abortion protesters outside the Boise hospital. If the same scenario were to occur later this year, she would likely be forced out of office.

That’s because Idaho, which bans abortion after six weeks, is one of at least 22 states with laws banning abortion before the 15th week, and many of them have no exceptions for fetal viability, rape or incest, or even women’s health. Some of those bans would come into effect if the U.S. Supreme Court rules overturning the 1973 Roe v. Wade decision, as a leaked draft of the advisory suggests.

Many of the current abortion bans are designed as “trigger laws,” which will take effect automatically if the Supreme Court overturns the nationwide right to abortion† That ruling is expected to be announced in late June or early July.

Alabama and Oklahoma have enacted bans with no exceptions. Alabama’s 2019 law has been blocked by federal court but can be reinstated based on the Supreme Court ruling. The Republican sponsors saw the legislation as a means of taking Roe to court, and said they could add rape and incest exceptions later if Roe is destroyed.

“They’re basically using people — in this particular situation, women — as collateral damage,” said Democratic Rep. Chris England, the chairman of the Alabama Democratic Party. “During the debate, we tried to have a reasonable conversation with them and say, ‘What happens if you win? This is the law, you don’t get a chance to change it until people get hurt.’”

Several other states, including Arizona, Florida, Kentucky, Louisiana, Missouri, South Dakota, Tennessee and Texas, have also banned or enacted laws that don’t make exceptions for rape or incest, according to the Guttmacher Institute and Associated Press reporting.

Idaho and Utah have exceptions for rape or incest, but require the pregnant woman to first file a police report and then prove to the abortion provider that the report was made. According to the Rape, Abuse & Incest National Network, only about a third of assaults are reported to the police.

Texas and Idaho allow exceptions for “medical emergencies” but leave that interpretation to doctors, leading some critics to fear doctors will wait to intervene until a woman is near death.

Public support for a total abortion ban appears low, according to a Pew Research Center survey released Friday and conducted in March. The survey found that only 8% of American adults believe that abortion should be illegal in all cases, with no exceptions, and 61% of adults believe that abortion should be legal in most or all circumstances. Surveys consistently show that many Americans have a nuanced stance on the legality of abortion, depending on the stage of pregnancy, the circumstances of conception, and the health of the mother or fetus.

Arkansas has two near-total abortion bans — a 2019 trigger law and one passed last year that is being blocked by federal court. Neither has exceptions for rape or incest, although they do allow abortions to save the woman’s life. The state has also never repealed the total pre-1973 abortion ban without restrictions.

Republicans in the state were divided on the issue last year, with Governor Asa Hutchinson and Senator Missy Irvin expressing concerns about the lack of protection for survivors of sexual assault.

The sponsor of last year’s ban, Republican Senator Jason Rapert, defended the lack of waivers, saying it still allowed the use of emergency contraception.

Elizabeth Nash, a state abortion rights policy analyst who supports the Guttmacher Institute, said that of 86 pending abortion restrictions proposals this year, only a few — including one in Idaho, New Jersey and West Virginia — contain rape and incest exceptions.

The exceptions were always “incredibly limited,” she said. “You would think these exceptions would be useful. But in fact they are so limited that they are very difficult to use.”

Troy Newman, chairman of the national anti-abortion group Operation Rescue, said exceptions to abortion restrictions for rape and incest, and to protect the life of a pregnant woman in the past, “have been thrown in there to appease some centrists.”

Newman said his group, based in Wichita, Kansas, opposes rape and incest exceptions. Their rationale: “Don’t punish the baby for the father’s crime.”

The Ohio legislature is weighing a trigger law that has no exceptions to sexual assault. At a hearing last month, the GOP sponsor of the bill, Representative Jean Schmidt, caused controversy when she called rape pregnancy “an opportunity” for the rape victim to “make a decision about what she will do to make that life a productive one.” man.”

She was responding to a question from Democratic Rep. Rich Brown, who asked if a 13-year-old who became pregnant during a rape would be forced to term.

Rape “makes emotional scars on the individual,” admitted Schmidt, “but when a baby is made, it’s a lifetime.”

Democratic Rep. Tavia Galonski refuted that pregnancy in itself is often traumatic and dangerous, adding: “To then force a rape survivor to carry out a pregnancy and go through childbirth is utterly despicable and only bears fruit.” adding to the trauma they have already suffered.”

In South Carolina, supporters of an abortion ban in 2021 added exceptions for rape and incest because it was the only way to get the law passed. During the debate, Republican Senator Richard Cash argued against the exceptions.

“Punish the rapist… but it’s not part of the baby,” he said.

Democratic Senator Mia McLeod replied that it was clear that Cash had never been raped.

“Well, I have. You’re looking at a survivor of sexual assault,” she said, adding that forcing rape victims to bring babies to term could lead them to desperate measures, including dangerous illegal abortions or suicide.

“I just ask that the men in this body give the women and girls of this state a choice,” McLeod said.

New Hampshire has banned abortion after 24 weeks of pregnancy except when the woman’s health is threatened, though the state will soon add an exception for fatal fetal abnormalities. The Republican-led legislature has rejected attempts to add rape and incest exceptions.

Republican Representative Beth Folsom, who said in January she is a rape survivor, argued that the exceptions are not necessary because rape victims carefully monitor their menstrual cycles and would not wait 24 weeks to request an abortion. An incest exception was not necessary, she added, because “that aggressor will get the young girl or woman to have an abortion before anyone finds out.”

Mallory Schwarz, executive director of Pro-Choice Missouri, expressed concern that provisions in laws like those in Texas that allow abortions longer than six weeks in medical emergencies will require doctors to wait until a patient appears to be die to perform an abortion.

“All that kind of pieces left to interpretation will generally have a broadly chilling effect on healthcare providers who don’t want to jeopardize their careers and livelihoods and practice and ability to care for other patients,” Schwarz said.

Many bans prohibit abortion after six weeks, when vaginal ultrasound can first detect electrical activity in embryonic cells that can later become the heart. Proponents call them “heart rate laws,” arguing that heart activity is a reliable indicator of life.

In Idaho, Housley has repeatedly testified against the state’s abortion bans in the legislature, but said lawmakers were not interested in hearing about her experience.

“My baby had a heartbeat, but that’s not all a baby needs,” Housley says. Anti-abortion politicians “are not interested in the reality of this issue at all. They hijacked this discussion and that is why we are where we are.”

Hanna was reporting from Topeka, Kansas. Associated Press writer Hannah Fingerhut and AP Statehouse reporters from across the US contributed.