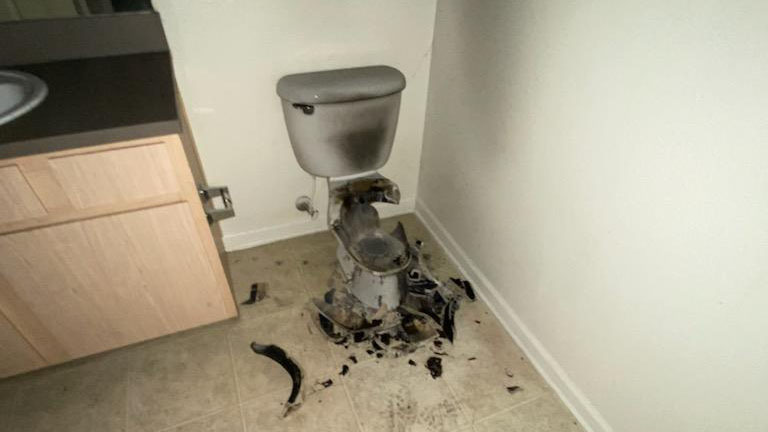 (NEXSTAR) — As if we weren’t already feeling vulnerable enough in the bathroom, a recent incident in Oklahoma sheds some light on yet another nightmarish possibility.

Firefighters from the Okmulgee Fire Department were called to the scene of an incident in an apartment building Wednesday night after a lightning bolt passed through the exhaust vent and shattered a toilet in one of the units.

No one was injured, but the toilet was “seriously damaged,” fire chief Dewayne Hurt wrote in a statement shared with Nexstar.

An explosion of this type — a toilet blown to smithereens during a thunderstorm — isn’t entirely unheard of, though it seems to be quite rare. One of the few other cases in recent years happened in 2019, when lightning struck near a Florida couple’s septic tank, igniting the gases inside and detonating one of their toilets.

According to an Okmulgee firefighter who spoke to Nexstar, the lightning that struck the Oklahoma apartment complex struck a different route, hitting the roof first before coming through a metal exhaust vent and hitting the water in the toilet.

The reaction caused the bowl to blow apart, he said.

Chief Hurt said the lighting also started a small fire in the attic, which was extinguished by the crew.

Experts say lightning can also travel through plumbing. That’s why the National Weather Service and even the CDC don’t recommend using the shower, tub, or even washing dishes during an electrical storm. Neither mentions toilets specifically, but both advise avoiding all plumbing or pipes, while the CDC says to avoid “all water” during a storm.

Other lightning safety tips from the NWS, as well as an analysis of recent lightning deaths, can be found on the department’s website.