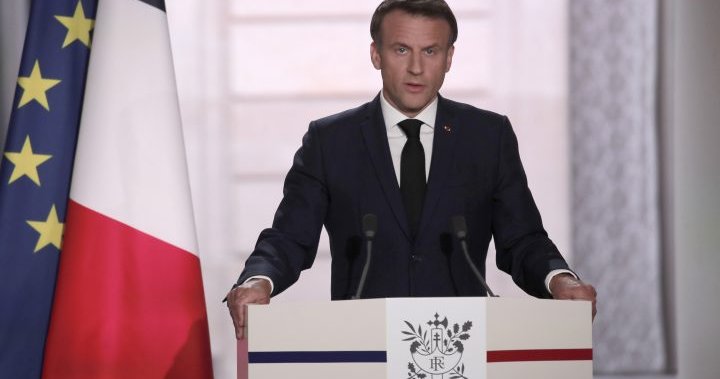 President Emmanuel Macron was inaugurated for a second term on Saturday, promising to take action first to prevent a further escalation of Russia’s war in Ukraine, before focusing on promoting France and Europe on the world stage.

Macron was reelected on April 24 for a five-year run in a runoff election in which he defeated far-right rival Marine Le Pen.

“The time ahead will be one of resolute action for France and for Europe,” Macron said. He promised “to take action first to prevent escalation after the Russian aggression in Ukraine”.

Macron pledged to “take relentless action with the aim of being a more independent nation, living better and building our own French and European responses to the challenges of the century.”

Macron also promised to find a “fair method” of governing the country and easing social tensions by making the government and parliament work with trade unions, associations and other people from the political, economic, social and cultural world.

For a president who spoke for hours at ease, Macron’s speech was surprisingly short — and handwritten. But then he took the time to shake hands, exchange kisses on the cheek and chat individually with dozens of guests.

While he was in charge of strict lockdowns and mandates for coronavirus vaccines as the pandemic swept through France, most restrictions have now been lifted and there was no sign of masks or social distancing at the inauguration.

The event seemed unusually kid-friendly for French presidential ceremonies, with several dignitaries bringing their kids with them — and at least two in strollers. Macron, 44, has no children of his own, but does have stepchildren and grandchildren, some of whom did.

About 500 guests were invited to the ceremony. They came mainly from the political world, but also included actors, health workers, soldiers and former presidents Francois Hollande and Nicolas Sarkozy. Most of those who received a coveted invitation to the event were white men in suits, despite a growing push for diversity in French politics.

On his arrival in the lobby of the Elysee, Macron winked at his wife, Brigitte Macron.

The president of the Constitutional Council read out the results of the elections and Macron was given the necklace of Grand Master of the Legion of Honour, France’s highest decoration, before giving his speech.

He then went to the gardens of the Elysee Palace and listened to the 21 cannon shots fired from Invalides Square to mark the event, in line with tradition.

French elections 2022: why is it important to the rest of the world as the war between Russia and Ukraine continues?

Macron also looked at the military. Troops present at the ceremony included some of the crew of the Monge, the second largest ship in the French Navy and key to France’s nuclear deterrent. It was notably used for testing France’s submarine-launched M51 missiles.

The symbol can be seen as a show of force at times when France is heavily involved in efforts to stop Russia’s war against Ukraine, including sending truck-mounted cannons and other heavy weapons.

Macron’s second term will formally begin on May 14.

Angela Charlton contributed to this story.