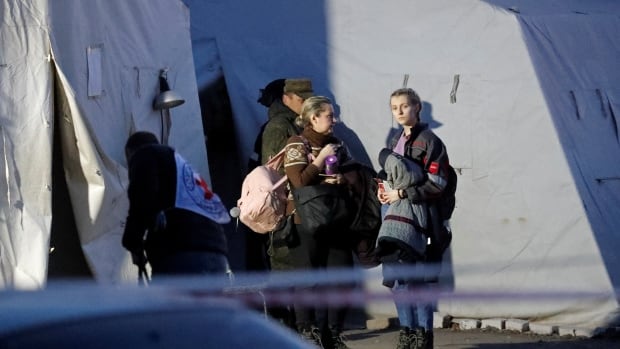 Ukraine said only 50 civilians were evacuated from a bombed steel factory in the city of Mariupol on Friday, accusing Russia of violating a ceasefire meant to let all those trapped beneath the factory leave after weeks of siege.

Mariupol has withstood the most destructive bombardment of the 10-week-old war, and the sprawling Soviet-era Azovstal factory is the last part of the city, a strategic southern port on the Sea of ​​Azov, still in the hands of Ukrainian fighters.

Ukrainian President Volodymyr Zelenskiy said in a video address late at night that Ukraine was working on a diplomatic effort to rescue defenders barricaded at the steel plant. “Influential intermediaries are involved, influential states,” he said, but gave no further details.

Zelensky previously described Russia’s blockade of Mariupol as torture and said that if Russia killed civilians or troops who could otherwise be released, its government would no longer be able to hold peace talks with Moscow.

The UN-mediated evacuation of some of the hundreds of civilians who had taken refuge in the factory’s network of tunnels and bunkers began last weekend before being halted by renewed fighting.

On Friday afternoon, 50 women, children and the elderly were evacuated from the factory, Ukrainian Deputy Prime Minister Iryna Vereshchuk said, adding that the operation would continue on Saturday. The Russian side was constantly violating a local ceasefire, she said, causing the evacuation to be very slow.

Russia confirmed the number of evacuees and plans to continue the evacuations on Saturday, but did not comment on its allegation.

The city’s mayor estimates that 200 people were trapped in the factory with little food or water.

In a video from the factory posted online late Thursday, an Azov regiment medic who gave his name as Hasan described people dying of wounds and starvation.

Authorities in Mariupol previously accused Russian troops on Friday of violating the ceasefire at the steel plant by firing at a car involved in evacuation efforts, which killed a Ukrainian fighter and injured six.

Russia did not immediately respond to the city council’s online statement. It had previously said there were humanitarian corridors.

By Russia’s most recent estimate, there are also some 2,000 Ukrainian fighters in a vast maze of tunnels and bunkers beneath the Azovstal steel mill – and they have repeatedly refused to surrender.

UN Secretary-General Antonio Guterres said on Thursday that the organization must “continue to do everything possible to get people out of this hell”.

People escaping Mariupol typically have to pass through disputed areas and many checkpoints — sometimes taking days to reach relative safety in the Ukrainian-controlled city of Zaporizhzhya, about 230 kilometers to the northwest.

The battle in the last Ukrainian stronghold of a city reduced to ruins by the Russian attack seemed increasingly desperate amid growing speculation that President Vladimir Putin wants to end the battle for Mariupol so that he can achieve a triumph in time for Monday’s victory day. to the Russian people, which marks the Soviet Union’s victory over Nazi Germany and is the largest patriotic holiday on the Russian calendar.

Prior to Victory Day, municipal workers and volunteers cleaned up the remains of Mariupol, a city now under Russian control, except for the steel mill.

Bulldozers scooped up debris and people swept streets against a backdrop of buildings eroded by shelling. Workers repaired a model warship and Russian flags were hoisted from power poles.

Russia struggles to make a profit in Donbas

The fall of Mariupol would deprive Ukraine of a vital port, allow Russia to establish a land corridor to the Crimean peninsula it captured from Ukraine in 2014, and free up troops to fight elsewhere in the Donbas, the eastern industrial region. where the Kremlin says is now the main target.

Its capture also has symbolic value, as the city has been the scene of the worst suffering of the war and surprisingly fierce resistance.

Ukraine’s general staff said Russian forces continue to try to take over the rest of eastern Ukraine, where the Russian defense ministry said it had destroyed an ammunition depot in Kramatorsk and shot down two Ukrainian warplanes.

But Ukrainian presidential adviser Oleksiy Arestovych said in a video briefing that Ukrainian forces had made some progress near Kharkiv and Kherson, inflicting “significant losses” on the Russians, while also incurring losses of their own.

It was not possible to independently verify the statements of both sides about events on the battlefield.

VIEW | New operation underway to get civilians out of Mariupol steel plant:

In fact, the protracted standoff at the Mariupol plant helped thwart Russia’s plans for the Donbas, Britain’s Defense Ministry said in a review on Friday.

The fighting at the factory “has been at the expense of personnel, equipment and ammunition for Russia,” it said. “As Ukrainian resistance continues in Azovstal, Russian losses will continue to bolster and frustrate their operational plans in southern Donbas.”

Moscow calls its actions a “special military operation” to disarm Ukraine and rid it of Western-fueled anti-Russian nationalism. Ukraine and the West say Russia has started an unprovoked war. More than five million Ukrainians have fled abroad since the invasion began.

US President Joe Biden and other Western leaders plan to hold a video call with Zelensky on Sunday, the White House said, in a show of unity before Russia marks Victory Day. Biden announced a security assistance package to Ukraine that will provide additional artillery ammunition, radars and other equipment. A US official separately said it was worth $150 million US.

In another statement, the White House said Biden held a meeting with Canadian Prime Minister Justin Trudeau on Friday, underlining their commitment to holding Russia accountable for its actions. They also discussed efforts to provide security assistance to Ukraine.

The Italian government, meanwhile, has ordered the seizure of a $700 million yacht allegedly associated with Putin in the media.

The UN Security Council – which includes Russia – also expressed “deep concern” about the situation in Ukraine on Friday, the first statement since the February 24 invasion.

The Russians pulverized much of Mariupol, which had a pre-war population of more than 400,000, and a two-month siege trapped perhaps 100,000 civilians with little food, water, electricity or heat.

Civilians hiding in the factory may have suffered even more, squatting underground for months without seeing daylight.