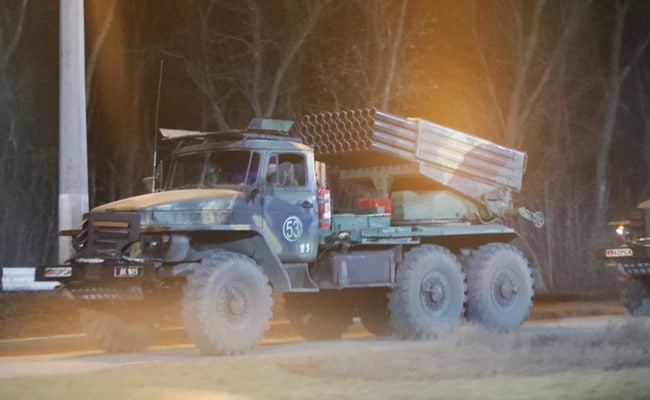 Russia is again targeting the south and east of Ukraine.

Ukraine attempted to evacuate more civilians from a besieged steel mill in Mariupol on Saturday as Russian forces unleashed new bombings across the country ahead of Victory Day festivities in Moscow.

The Azovstal steel mill is the last Ukrainian resistance in the devastated port city, and its fate has taken on symbolic value in the wider struggle since the Russian invasion.

Fighting on many fronts continues and the Ukrainian Defense Ministry said it had destroyed another Russian warship – a Serna-class landing craft – in the Black Sea.

“The traditional parade of the Russian Black Sea fleet on May 9 this year will be held near Snake Island – at the bottom of the sea,” the ministry added. Russia did not immediately confirm the incident.

Ukraine’s defense ministry had previously said Russian forces had resumed their attack on the Azovstal site, despite rumors of a ceasefire to allow trapped civilians to flee the complex.

According to the Russian Defense Ministry, 77 planes will make a flypast, including the rarely seen Il-80 Doomsday plane that can withstand a nuclear attack.

Eight Mig-29 fighter jets will fly over Moscow’s Red Square, forming the letter “Z” – the sign of the Russian military attack on Ukraine.

The campaign has met strong opposition — and has prompted Kiev’s western allies to impose massive economic sanctions on the Russian economy and Putin’s inner circle.

The Ukrainian rescue service said a missile hit a technical school in Kostiantynivka, in the eastern region of Donetsk, causing a fire and at least two deaths.

Strikes have also been reported in northern Ukraine near the city of Kharkov and in the southern city of Mikoleyev, a prime Russian target.

Ukrainian troops have launched a counter-offensive of their own.

According to the defense ministry, Russian forces were forced to demolish three road bridges at Tsyrkuny and Ruski Tyshky outside Kharkov to slow down the Ukrainian advance.

According to British intelligence, Ukrainian forces equipped with high-quality weapons by Western allies have been able to destroy at least one of Russia’s most advanced tanks, the T-90M.

“The conflict in Ukraine is taking a heavy toll on some of Russia’s most capable units and most advanced capabilities,” Britain’s defense intelligence agency said.

“It will take a lot of time and expense for Russia to reconstruct its armed forces after this conflict,” it said, warning sanctions on advanced components would make it more difficult for Russia to rearm.

The West, meanwhile, is ramping up arms deliveries to Ukraine’s defenders.

US President Joe Biden Friday announced another package of military aid worth $150 million, including counter-artillery radars used to detect the source of enemy fire.

This brings the total value of US weapons sent to Ukraine since the Russian invasion began to $3.8 billion.

Biden had urged Congress to approve another $33 billion package, including $20 billion in military aid, “to strengthen Ukraine on the battlefield and at the negotiating table.”

G7 leaders, including Biden, and Ukrainian President Volodymyr Zelensky will meet in videoconference on Sunday to discuss Western support for Kiev.

And Biden’s wife, US First Lady Jill Biden, is in Romania to meet US troops and Ukrainian refugees.

Her visit showed “the magnitude of such blatant violations of human rights and humanitarian law, with mounting evidence of widespread arbitrary killings, torture and enforced disappearances.”

The organization, which protects human rights, democracy and the rule of law in Europe, expelled Russia from membership in March.

The Russian Defense Ministry said 50 people had been evacuated from the site, including 11 children.

It added that they have been handed over to the UN and the Red Cross, who are assisting with the operation, and that the “humanitarian operation” would continue on Saturday.

About 200 civilians, including children, are said to be trapped in the tunnels and bunkers under Azovstal, along with Ukrainian soldiers taking their last stand.

Russia announced a three-day ceasefire at the factory from Thursday, but the Ukrainian military said Russian “assault operations” had continued both by ground and air.

The Ukrainian Azov battalion, which leads the defense at Azovstal, said a Ukrainian fighter had been killed and six injured when Russian troops opened fire while trying to evacuate people by car.

Since it failed to take Kiev early in the war, Russia has refocused on southern and eastern Ukraine.

Full control of Mariupol would allow Moscow to create a land bridge between the Crimean peninsula, which it annexed in 2014, and separatist, pro-Russian regions to the east.

In those regions, separatists said they had removed Ukrainian and Anglophone traffic signs for Mariupol and replaced them with Russian ones.

Locals want to see proof that “Russia has come back here forever,” said Denis Pushilin, head of a pro-Russian breakaway region in Donetsk.

In neighboring Lugansk, Ukrainian officials said on Friday that Russian forces had nearly surrounded Severodonetsk – the easternmost city still controlled by Kiev – and are trying to storm it.

Kherson in the south is still the only major city that Russia has captured since the beginning of the war.

A senior official of the Russian parliament who visited the city on Friday also stressed that Russia would remain “forever” in southern Ukraine.

“There should be no doubt about this. There will be no return to the past,” said Andrey Turchak.