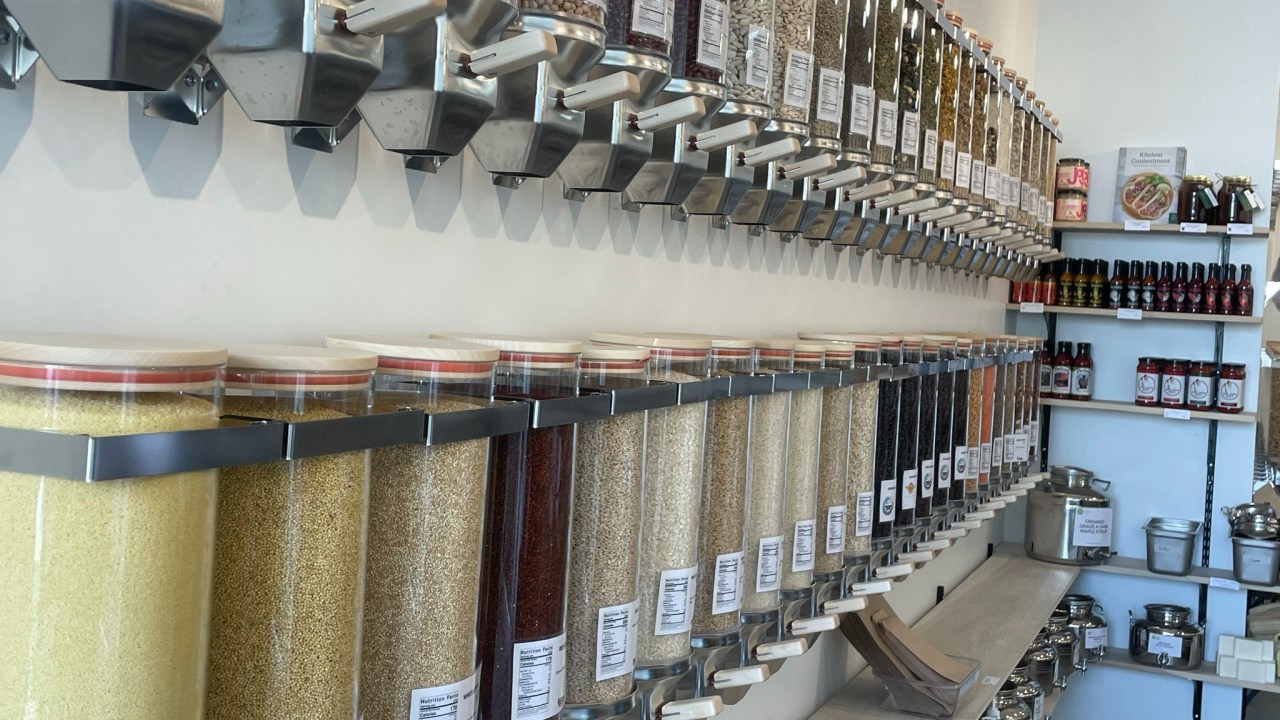 SAN DIEGO — A unique supermarket concept opened in San Diego last month, inviting customers to bring their own containers and reduce the amount of waste created by shopping.

Located a few blocks from the iconic North Park Water Tower on El Cajon Boulevard, The Mighty Bin is a nod to the zero-waste movement that is doing away with single-use plastic and other environmentally harmful packaging.

The store displays its wares in “gravity dispensers” – those clear tubs with a release lever you see with cereals at the hotel buffet line – large jars and glass display cases.

Customers arrive with empty containers and bins, have the empty items weighed and labeled, and fill them with the food they want to buy. Then they go back to the counter to weigh and pay for their products.

The store sells reusable jars and containers for those who don’t have enough containers to hold their purchases, and employees also collect a selection of donated containers that they sanitize and then offer to customers.

Isabelle DeMillan is the passionate entrepreneur behind the project, which raised more than $35,000 on Kickstarter and finally held a grand opening on April 9 after a grueling licensing process.

In a phone interview Friday, DeMillan told FOX 5 that her idea for the store was driven by personal experience. She was frustrated by the lack of small, local options to reduce waste and eat more sustainably. Even as she tried to reduce her negative impact on the environment, DeMillan found that she relied on orders from multiple sources — and still rummaged through a lot of plastic and other single-use packaging for that.

“I was tired of looking for organic foods as well as non-toxic products,” DeMillan said. “I had to do a lot of research and ordered online. I really framed this shop based on what a struggle it was for me. †

DeMillan said the nickname “zero-waste” is more ambitious than literal.

“It’s a goal. It’s something we’re aiming for,” she told FOX 5. “It’s not something we can necessarily achieve right now.”

But the store and its customers certainly go through a lot less material than your typical grocery store. DeMillan has recycling and composting partners for what does go to waste: items like the polyethylene liners on large bulk bags the store uses for resupply.

“I haven’t used my trash can once since we opened,” DeMillan said.

The store gets its food from a variety of sources, including Oregon organic distributors and local vendors that take advantage of California’s “great year-round growing season” for produce.

The store carries a wide variety of items, and DeMillan said her fears — that she wouldn’t be a “one-stop shop” for new customers — have so far gone unrealized. Visitors have told her they are amazed at how much she has in stock.

Still, the late pandemic issues in the supply chain are hitting small businesses all the more, and sometimes strange things (DeMillan called garbanzo beans and pepper) are just out of reach. To help shoppers know what’s in stock, The Mighty Bin publishes an updated inventory list that you can view online.

The owner recognizes that reducing waste is a daunting task that cannot be accomplished overnight. “There’s a lot of helplessness that we feel,” DeMillan said.

But she hopes The Mighty Bin can help drive a broader change in consumer habits.

“Big companies, they’re a huge problem, but the point is — they’re still there because we support them,” DeMillan said. “We have to improve our purchasing power. We need to put our money where it will make the most change.”

You can read more on The Mighty Bin’s website or visit the store Tuesday through Sunday at 2855 El Cajon Boulevard, Suite 4.