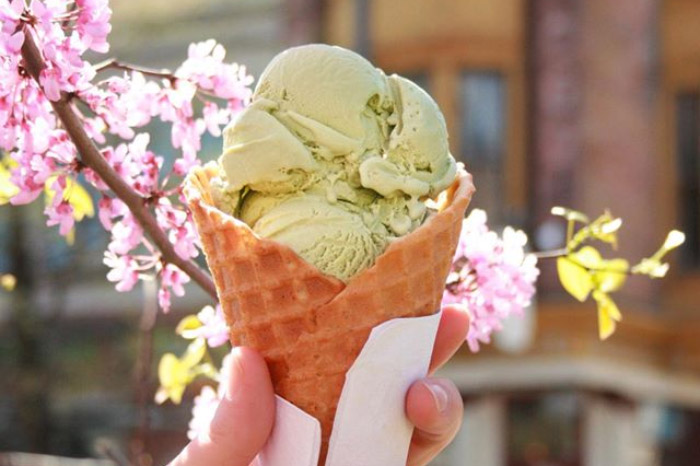 Really, ice cream is always great. Also true: it’s even better when it’s beautiful outside. As Philly hits that warm weather, you can find cool firsts here to refresh and rejuvenate.

This Old City store is proof that sometimes the old fashioned way is the best way. The historically accurate parlor of brothers Eric and Ryan Berley serves Philadelphia-style handmade cream in both traditional and exotic flavors. Don’t miss the custom soda from the hanging “acorns” behind the counter. Market Street 116

What could be better than one ice cream parlor in Old City? Two! The Berleys have added a second window displaying a range of unique offerings, including the ‘Keystone Bar’ of the same name. They are made to order and are dipped in chocolate made from beans roasted next door. Also on tap: soft-serve custard. 112 Market Street.

It looked as though this family-owned dairy would disappear if rents got too high at the Rittenhouse site, where it had held a sugary court since 1989. But it was successfully relaunched in Midtown Village and is now also present at the Fair Dining Hall. Look for candies, frozen yogurt, and pastries along with the scoops. 1315 Walnut St. & 111 S. Independence Mall E.

Owner Jen Satinsky is a former pastry chef, so it’s no surprise that her gourmet cookie-wrapped ice cream sandwiches are a hit. But the French-style cream inside is special too, made with organic milk from a dairy farm just 55 miles away. Expect flavors that change with the season, also available in pints, cups and cones. 9 W. Girard Ave.

After this gourmet paletta shop closed its Rittenhouse Square outpost during the pandemic, its flagship West Philly location expanded into a mecca of sweet treats — think creamy popsicles, aromatic ice cream scoops, and a rotating cast of ice cream sandwiches (the latter two courtesy to Weckerly’s). Ice cream flavors are in constant flux, but you can count on a wide selection of pops, from a matcha concoction filled with mochi chunks to patterned sticky mango rice. 265 S. 44th St.

A selection of Bassetts ice cream is backed by homemade sweets from the sisters who own this Front Street store in Kensington specializing in Middle Eastern cuisine, meaning baklava sundaes are definitely a thing. The kitchen also features savory dishes such as shawarma and tabbouleh. 1949 N. Front St.

This seasonal walk-up cabin with plenty of outdoor seating is a Manayunk favorite for ice cream, frozen yogurt, water ice, and shakes. Bring the dog – dog-friendly “pup cups” topped with Milkbones are a specialty. 4162 Main Street

This fourth-generation Roxborough scoop shop is known for its party ice cream cakes, but its over-the-counter service also has plenty of options. Everything from hard ice cream to fat-free to soft serve ice cream to froyo, plus plenty of toppings, sundaes and shakes. 5461 Ridge Avenue.

Founded in 1889, this candy store expanded through Philly and finally opened in Chestnut Hill in 1983. Baked goods make up the bulk of the business, but there’s an entire parlor side of the store serving scoops of about two dozen Bassetts flavors are served. 8126 Germantown Avenue.

Along with regular ice cream, this Ninth Street Market window is one of the best places in town to score Mexican raspados. The frozen slushies, also known as chamoyadas, are made with real fruit — mangonada has mango, lime, and chili powder — and they’re ultra refreshing. 1142 S. 9th St.

After starting at farmers’ markets, this homemade frozen treat operation landed in Mount Airy with a brick and mortar store. Customers rave about the rich flavors and specialty ice cream sandwiches, and homemade sorbet is also offered. 6616 Germantown Avenue.

This new scoop shop serving Bassetts is part of the Port Richmond renaissance era and specializes in splits, sundaes, and other creations. Don’t miss the house-dipped version of a Choco Taco, or the sandwiches made with fresh fritters from the cafe down the street. 2600 E Somerset St.

Think of Coco’s as a mix between a nostalgic seaside ice cream parlor and a carnival stall. Their menu is split between fudgy sundaes and picturesque soft swirls and honest snacks, such as fried Oreos, funnel cakes and — yes — corndogs. 3632 Powelton Ave.

This food truck converted into a shop on the edge of Queen Village sells banana delight, which – we know – isn’t technically ice cream. Instead, it’s a whipped banana topped with coconut whipped cream, making it the perfect base for a whole range of vegan sundaes, like the PBB&J, which comes with raspberry compote, lots of peanut butter, and graham cracker crumbles. 932 E Passyunk Ave.

On a busy stretch of East Passyunk Avenue, Arctic Scoop is best known for its pandan ice cream, flavored after a Southeast Asian plant with hints of vanilla and coconut. Other novelties include a slew of colorful cones treated to taste like red velvet cake or a creamsicle, and bubble waffles, which look like baked bubble wrap. 1812 E. Passyunk Ave.

The Italy-linked team behind Gran Caffe L’Aquila (see below) is branching out with this taglio-style pizza shop. To complement the scissors-cut, airy crust slices, there is a full range of rich Italian gelato made at the sister location. 235 S. 15th St.

Right next to Geno’s Steaks, this Italian market shop offers an extensive menu of traditional Italian pastries and desserts, including biscotti, cream puffs, cassatelle, sfogliatella and, of course, gelato. Looking for a twist on the classic cone? Get your scoop with a cannoli (or inside of one). 1205 S. 9th St.

After an earthquake destroyed the hometown of Italy’s top gelato maker (Stefano Biasini has won the Gelato World Cup), he transferred his talents to Philly. Order at the counter opposite this Rittenhouse restaurant, cafe and wine bar and be amazed by the creamy texture. 1716 Chestnut Street.

Though you might not tell by the name, this Italian market favorite scoops up gelato all year round. Flavors range from staples like limoncello, stracciatella, and the ever-classic chocolate to more new options, like pumpkin pie or peaches and cream. A bonus: For a sugar shake, pop a homemade cannoli into a gelato cup. You’re welcome. 903 S. 9th St.

Of course, America’s oldest ice cream company originated in Philadelphia. The stand in Reading Terminal Market has been there since 1892 and still turns out to be giant cups and cones under the purview of fifth generation owners. There is usually a line, but it moves impressively fast. 45 N. 12th St.

On South Street, this classic is a good alternative to the Rita’s across the street, with shorter lines and a cool interior to wait in. Cones, cups, sundaes, this 80s classic has it all. 242 South Street.

From Blizzards to candy-dipped cones, nothing’s a surprise in this 75-year-old brand’s Old Town outpost, but sometimes that’s just what you need. 609 Chestnut Street

Turns out loaded flavors like Chunky Monkey and New York Super Fudge Chunk taste even better when scooped fresh than from a grocery store pint, and you can score them at the University City outpost. 218 S. 40th St.

A national brand, yes, but all the ice cream at this Port Richmond parlor is made in-store daily. Choose your flavor base and mix-ins and watch the blend come together before your very eyes. 2530 Aramingo Ave.

Look for the bright pink cap on the seasonal stall in Mayfair — that’s where you can roll over to the window and sip a soft serve ice cream or sundae to brighten up a hot day in the Northeast. 3401 Longshore Avenue.

This NYC-imported dairy sells a mix of regular and vegan ice cream flavors at their two Philly scoop shops, all of which sound like they came from Ina Garten’s kitchen. A few scoops costs almost $8, so consider this the treat of all goodies. Billy Penn-stamped recommendations include Honeycomb (actually just lovely caramel), Raspberry Layer Cake, and the Instagram-ready Planet Earth, which comes filled with chunks of matcha tea cake. 119 S. 13th St.; 115 S. 18th St.

Born in the Midwest (Columbus, Ohio, to be exact), Jeni’s invaded Philadelphia with two locations in Fishtown and Rittenhouse. While you could grab a pint from the more artisanal side of the grocery store ice cream department, something about licking flavors like Brambleberry Crisp and Everything Bagel from a cone is just different. 1332 Frankford Ave. Unit 101; 1901 Chestnut Street.

The new age of ice cream isn’t marked by whether or not it’s enjoyed in a cup, cone, or pint, it’s distinguished by whether or not it sells on Instagram Stories. Ryan Fitzgerald, the chef behind the “underground” Boku Supper Club, sells innovative, delicious mix-in pints by posting a selection of limited flavors to Instagram Stories every Saturday. Customers can quickly secure their pre-orders for Sunday evening, then pick up their online orders that Thursday or Friday at the secret Boku art gallery in Fairmount.