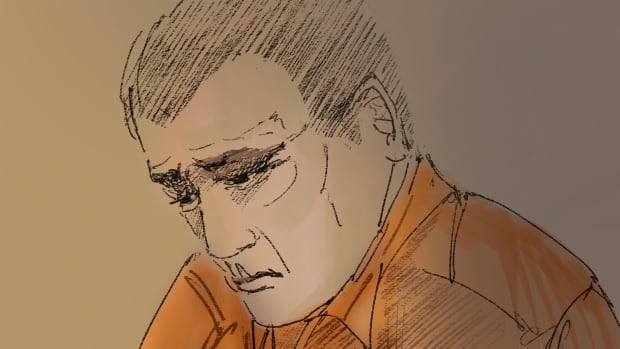 The 26-year-old man who carried out the Halloween sword attacks in Quebec City has been found guilty of two first-degree murders in the deaths of François Duchesne, 56, and Suzanne Clermont, 61, on October 31, 2020.

The 11-member jury reached its verdict on Friday after nearly five days of deliberation at the Quebec City courthouse.

Carl Girouard was also convicted on five counts of attempted murder for his assaults on five other people that night.

Girouard wore a freshly shaved head and stood up as the jury pronounced its verdict. He seemed stiff and stoic as he listened.

Lisa Mahmoud, one of the survivors, was present in the courtroom. She was seen holding hands with a friend and Suzanne Clermont’s sister-in-law as they awaited the verdict.

Mahmoud said she was very relieved by the verdict.

“I find it difficult to rejoice in the misfortune of others, but I am very happy that the jury made the right decision,” she said.

“He’s going to have a very bad life and that’s what he chose.”

Mahmoud said it was difficult to relive the day’s events and see Girouard again during the trial, but she was pleased to be able to share her story in court.

Girouard attacked Mahmoud with the saber at least 10 times, including a knife in the stomach. Mahmoud drew the sword from her belly while her friend distracted Girouard. They then both fled.

She said she still feels anger and is working hard in rehab to try to restore her motor skills, in hopes of returning to the hairdresser.

“I feel stronger now. I’m 26 years old. I still have my life ahead of me,” said Mahmoud. “He is not master of my life, nor of his own now,” she added, referring to Girouard.

Clermont’s sister-in-law, Marie-Claude Veilleux, also said she was happy with the verdict.

“Society will be protected from this dangerous person. Unfortunately, it is too late for Suzanne Clermont and François Duchesne,” Veilleux told reporters in the courthouse.

†[The verdict] won’t give us back our loved ones, but at least it will protect society.”

Veilleux said attending the trial was tough, but she felt it was her duty to be there every day.

The Crown argued that Girouard had spent years thinking about committing the attacks and was aware of what he was doing at the time of his crimes.

Two expert Crown witnesses testified that the defendant was a hypervigilant narcissist who felt the need to do something shocking to gain public recognition.

Girouard’s lawyer Pierre Gagnon said his client was disappointed with the ruling and plans to appeal.

“The verdict is clearly not in line with the arguments we have presented to the jury,” Gagnon said.

He said the four days the jury spent deliberating had allowed the defense team to discuss what happened during the trial and identify aspects they could use in an appeal.

That includes the five hours the prosecutor spent questioning Girouard, and his interpretation of Girouard’s lack of response to the jury.

Girouard admitted to carrying out the attacks, but his defense team claimed he could not be held criminally responsible because he was delusional and psychotic at the time, unable to distinguish right from wrong.

At the trial, Girouard testified that he was faced with an inner struggle between two Carls, the “real” and an “evil Carl” obsessed with a mission to kill.

The Crown argued that Girouard could not be delusional at the time, as he showed signs of hesitation before the attacks and expressed doubts about what he was doing after beating his first few victims.

Forensic psychiatrist Dr. Sylvain Faucher, who testified on behalf of the Crown, explained that delusion is an irrefutable belief and that it is impossible to get out of it so quickly without medication.

Prosecutors showed evidence suggesting Girouard had been planning the attack since he was in his late teens: driving to Quebec City’s historic district two years prior to the events, prepping his costume ahead of time, and removing some tattoos Girouard described as “impure.” ‘ considered.

The jury, made up of four men and seven women, heard that Girouard first told a social worker and a school counselor about his mission at the age of 18.

Girouard faces life in prison and will not be eligible for parole for at least 25 years. His trial, which began on April 11, had to be postponed twice after some jurors tested positive for COVID-19.

He will face court again on June 10 for his conviction. Many victims plan to testify at that hearing, the public prosecutor informed the judge.

The Crown awaits Supreme Court ruling in Quebec City mosque gunman case. The Supreme Court will decide on May 27 whether a person can receive consecutive sentences for murdering multiple people.