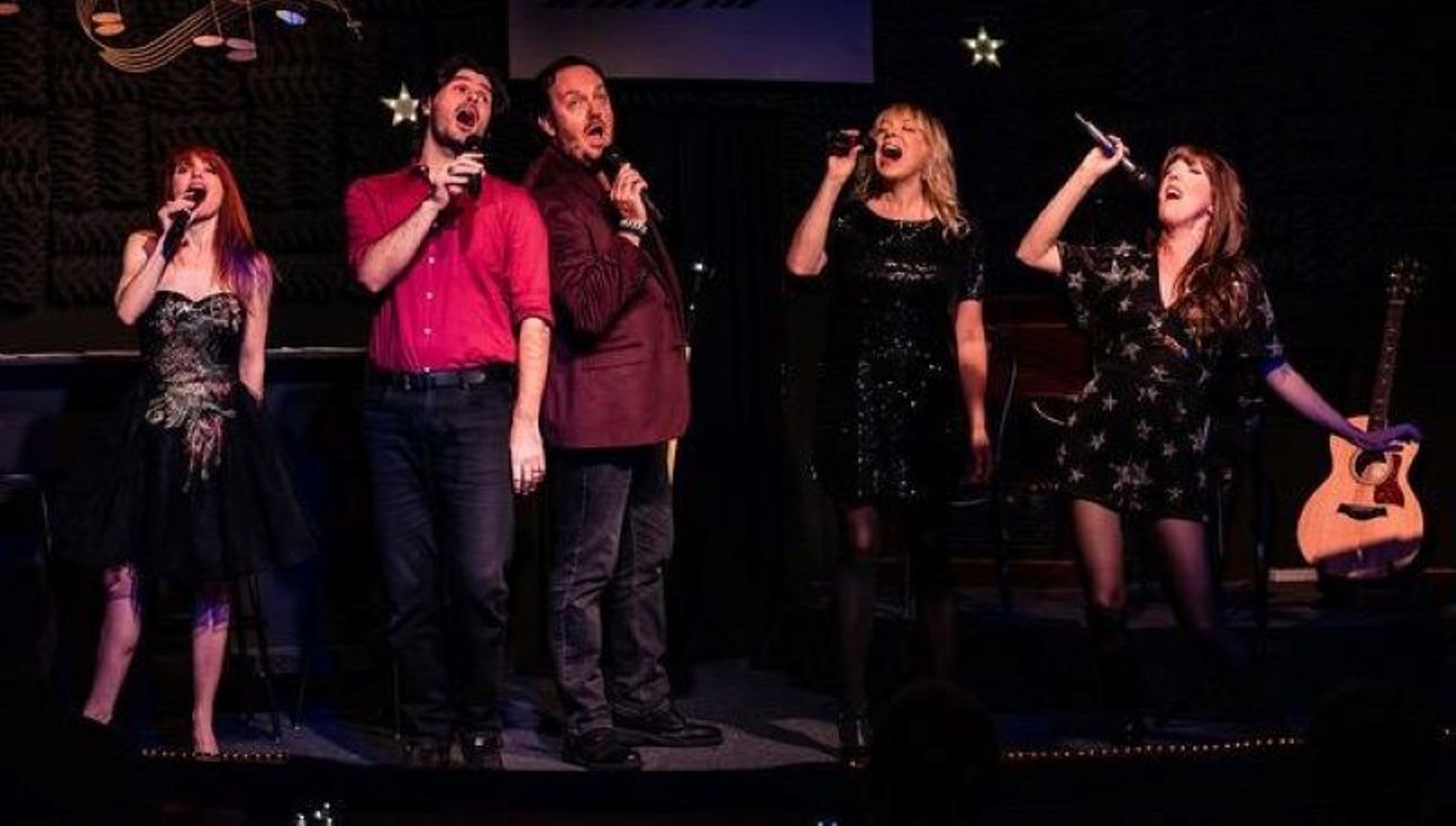 One of the great joys of Music Box Theater’s celebrated entertainment is that you never really know what you’re going to hear.

I’ll admit I was hoping the five would make their voices heard around “I’ll Never Smile Again,” “Chattanooga Choo Choo,” or “To Each His Own,” but MBT’s number one is off the Billboard Top 100, the industry standard from 1958. There go Glenn Miller, Bing Crosby and the Andrew Sisters. Hello, Elvis, Doobie Brothers, Barbra Streisand, Whitney Houston, John Denver, the Beatles, Meatloaf and a dozen others. Not a bad playlist either.

While all the songs hit #1, I didn’t know a few at all, especially Michael Jackson’s “Rock With You” performed by Dahl; Lisa Loeb’s “Stay” by Taylor, accompanying herself on guitar; and Boyz 2 Men’s “It’s so Hard to Say Goodbye” to “Yesterday” was gloriously sung a cappella by the five. What was I doing in my life when these were playing on the radio? Well, I know them now thanks to Music Box, and I can’t imagine they’re sung better than here.

As usual with MBT, each performer shines in a solo, either flowing seamlessly into a stunning quintet, or serving as a backup for the others, doo-wopping and dancing in the background. One of the favorite hits: Wrobel’s smooth rendition of ‘Save the Last Dance for Me’ by The Drifters, seductively complemented by Biel’s muted trumpet; Dahl and Scarborough’s wink “I Got You Babe,” which Sonny and Cher channels; Scarborough’s haunting tenor caressing “Yesterday” on harmonica with soaring piano riffs from Biel; Sullivan’s lilting take on “What a Fool Believes” by the Doobie Brothers, Taylor’s valentine for Lulu’s valentine for Sidney Poitier, “To Sir With Love.”

But there’s more. “Here You Come Again” by Dolly Parton, “You Don’t Bring Me Flowers” by Streisand and Neil Diamond, a rocking early Elvis tribute; a triptych with sun songs by Gordon Lightfoot, Stevie Wonder and John Denver; “I Wanna Dance With Somebody” by Whitney Houston, “Happy” by Pharrell, “The Dance” by Garth Brooks and “River of Dreams” by Billy Joel. Each is its own specialty, each beautifully executed.

Bringing it all together is an offstage oldies tribute to those ubiquitous radio countdown shows with unctuous DJs with their basso voices, male and female, weather and traffic reports, dialing in with requests. Luckily they aren’t jingles. It works well enough, if only to keep us waiting for the next issue.

If you’re unfamiliar with Music Box – itself rated the #1 thing to do in Houston on Trip Adviser – now is the perfect time to get acquainted. You may not know all the numbers either, but that doesn’t matter. The evening is a wonderful way to hear five great artists at the top of their game (and the band too). They can sing Twitter tweets and make them ravishing and definitive through and through.