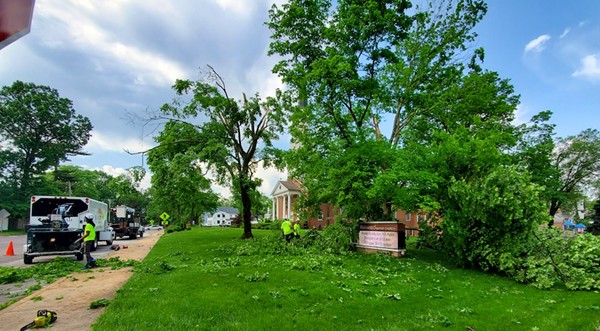 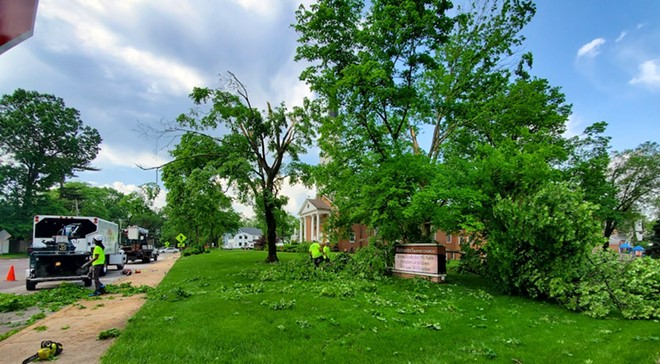 The National Weather Service says the tornado had winds of up to 80 miles per hour and was on the ground for five minutes. The tornado had a maximum width of 75 meters. Most damage is caused by fallen trees and tree branches. A house in Glendale was also damaged when a tree fell on it. There are no reports of injuries or deaths.

“We were locked in the basement,” said Terri Nappier, a Kirkwood resident. “After the storm, we ventured out and saw large trees being toppled. A tree on Sappington cut off the power, which has just been restored this morning.”

Ameren reported last night that 11,000 people were without power. As of this morning, nearly 2,000 customers in Missouri and about 3,700 in Illinois are still without power.

Floods were also reported in St. Louis. On Reddit, a user shared an image of Bates Street completely submerged and said he got two to three feet of water in his basement in 25 minutes. News outlets also reported sunken cars when I-55 flooded at Loughborough in south St. Louis City.

Of course, since this was St. Louis, people also joked about ignoring the tornado sirens.

“The first time we heard we were at 40 and didn’t know what to do. We took an exit and saw someone walking their dog. We came back at 40 and went home,” another commenter wrote.

According to the National Weather Service, thunderstorms are likely between 2 and 5 a.m. tonight, with t-storms likely in the afternoon on Saturday.