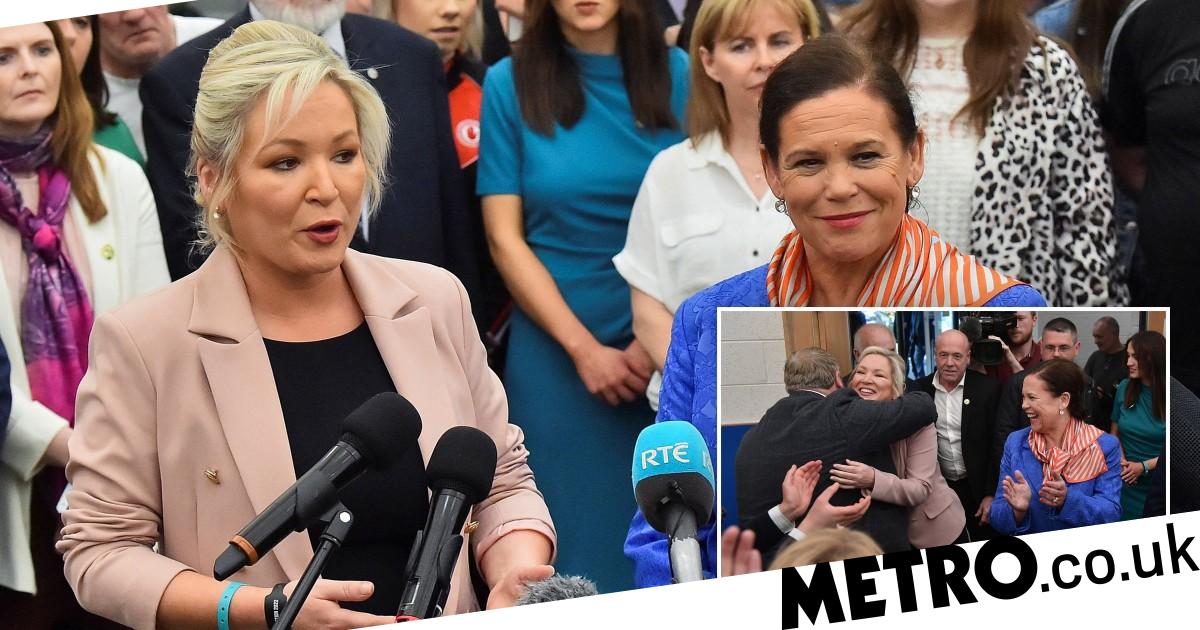 Sinn Fein called for a debate on the creation of a united Ireland after winning a historic victory in the Northern Ireland Assembly elections.

As the count continued through Saturday night, the latest results confirmed what had long been likely the Republican party would force the DUP into second place.

The party’s vice-chair, Michelle O’Neill, said the result, which made them the biggest in Stormont for the first time, “heralds a new era.”

She said there should now be an “honest debate” about the party’s goal of uniting the territory with the Republic of Ireland.

The victory will not change the status of the region, as any referendum needed to leave the UK is at the discretion of the British government and is likely to take years.

But the symbolic importance is enormous and a century of rule by pro-British parties, mainly supported by the Protestant population of the region, is coming to an end.

Shortly after 7 p.m. on Saturday, 88 of the 90 convention seats were filled.

Sinn Fein currently has 27 seats, while the DUP has 24, the Alliance Party 17, the Ulster Unionists (UUP) nine and the SDLP seven, with four others.

The Alliance Party also had a successful election and will emerge as the third largest party in Stormont, while the UUP and SDLP have had disappointing results.

Ulster Unionist leader Doug Beattie was elected to Upper Bann, despite previous fears he could lose his seat.

However, the SDLP was upset when Stormont’s deputy leader and outgoing infrastructure minister, Nichola Mallon, lost her seat in North Belfast.

In her statement address in Magherafelt after she topped the poll in Mid Ulster, Ms O’Neill said: ‘Today represents a very important moment of change.

Today ushers in a new era that offers all of us the opportunity to reshape relationships in this society based on fairness, on the basis of equality and on the basis of social justice.

“Regardless of my religious, political or social background, it is my commitment to make politics work.”

She said: ‘We look forward to the creation of an Executive, I look forward to Michelle O’Neill being nominated as Prime Minister and having a politics that helps people.

“We would appeal to everyone to take stock, breathe and really appreciate the enormous responsibility we all bear.

‘Together we have a duty to keep the government running.’

The DUP dropped Northern Ireland’s power-sharing executive branch earlier this year as part of its protest against the Northern Ireland Protocol, vowing not to re-enter government until their concerns are allayed.

Naomi Long, leader of the Alliance Party, has said nothing can be achieved without a government in Northern Ireland, following the electoral success of her cross-community party.

The DUP, led by Sir Jeffrey Donaldson, will comfortably maintain its position as the largest trade union party, despite a decline in its overall share of the vote.

Speaking to the Earl at the Titanic Exhibition Centre, Sir Jeffrey said the union work “has held its own”.

“The union vote remains strong, we are the largest nomination in the Assembly, I think there is a lot of spin around the results and I am very happy with how the DUP has fared in our constituencies,” he said.

“We’ve taken a remarkable amount of seats where people were predicting all kinds of negative things, so we have a strong foundation, we’re building on that.”

When asked whether Northern Ireland will have handed over the government by 2022, Sir Jeffrey said: ‘Let’s cross all the bridges when we reach them.’

He also said he will make it clear next week whether he will return to Stormont or stay in Westminster.

Sir Jeffrey was elected at the first count in Lagan Valley.

TUV leader Jim Allister kept his seat in North Antrim, but it seems unlikely his party will win any more seats.

About 239 candidates stood in 18 constituencies.

Five Assembly seats are up for grabs in each of the 18 constituencies.

For more stories like this, check our news page†

Get the latest news, feel-good stories, analytics and more