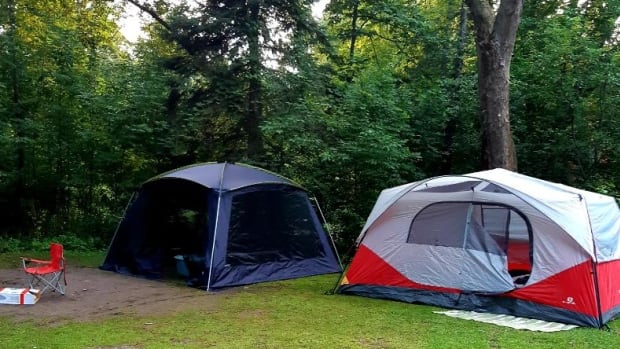 Helen Mason has camped in Ontario’s provincial parks for nearly four decades, but has never experienced anything like it: While visiting a friend outside the campground, someone showed up and stole everything from her tent and grill to the food she had packed for her trip.

“I’ve been camping in provincial parks for 39 years, since I was 13 years old, and nothing has ever been stolen from a campground, not so much as a tent peg or anything else from the cooler. It didn’t even cross my mind,” said Oakville, Ont., resident Mason, who was on a solo camping trip in Pinery Provincial Park on Lake Huron.

“I had no idea someone would have the nerve to just drive up to me and pack up my entire campsite.”

Mason arrived at the Pinery on the night of April 29, pitched her tents and built herself a nice campfire. That Sunday an old friend called and asked her to come over.

Mason returned the next day to find that almost everything was gone.

“I thought my tent had blown away because you could actually see my bright red tent as you drive into the campground and I couldn’t see it. Then I got closer and got out of my car, and I slowly realized that really all I had was I brought with me was gone, from my tent to my clothes, my kitchen tent and all the stuff in it.”

While there are occasional thefts at the campground, such large-scale thefts are unheard of, says Pinery superintendent Mark Custers.

“Never on this scale. Usually people steal smaller items, a cooler with alcohol in it,” he said.

Theft at campsites is ‘rare’

The theft violates an unspoken rule at camping, an honor system where people don’t steal from each other because it’s impossible to lock things up and everyone is in the wild together.

“I’d say it rarely, rarely, rarely happens,” Mason said. “It’s an honor system because you can’t really expect people to want to go camping and sit by their belongings all the time, and there’s no way to lock certain belongings. I’ve never met anyone else who has anything stolen.”

Ontario Parks, for its part, provides a series of camp safety tips on its website. When it comes to theft prevention, it says, “While campgrounds are safe places with park rangers on patrol, it’s a good idea to lock your valuables in your car and out of sight.”

Mason reported the theft to the park ranger, who said he had never heard of an entire campground being seized.

Mason enjoys camping and makes solo trips once or twice a year. She also goes on two or three other trips with her children.

But it will take time and money to replenish her camping gear. In addition to her new 10-person sleeping tent, there are other stolen items: a queen-size pull-out bed, a heater and a new chair. Her bedding and a homemade blanket were not taken.

These items have been stolen from the kitchen and dining tent: Mason’s barbecue, Coleman grill, all of her cooking utensils, pots, oils, spices, silverware, plates, and camping lanterns.

They also took her shampoo and dish soap, but left her backpack and her Starbucks coffee.

“I was shocked at how thoroughly they cleaned up everything. I can’t think of anything they left out of my camping gear.”

While Mason can use her old gear as a backup, she said she’ll need to start collecting new gear as the season progresses. The theft didn’t stop her from going camping, though.

“Honestly, I was more upset that my camping trip was cut short than someone took my stuff,” she said. “My concern is, if someone is dropped off for a week’s camping trip and someone takes all their food and shelter with them, what would happen to them? Not everyone has the luxury of camping with a car.”