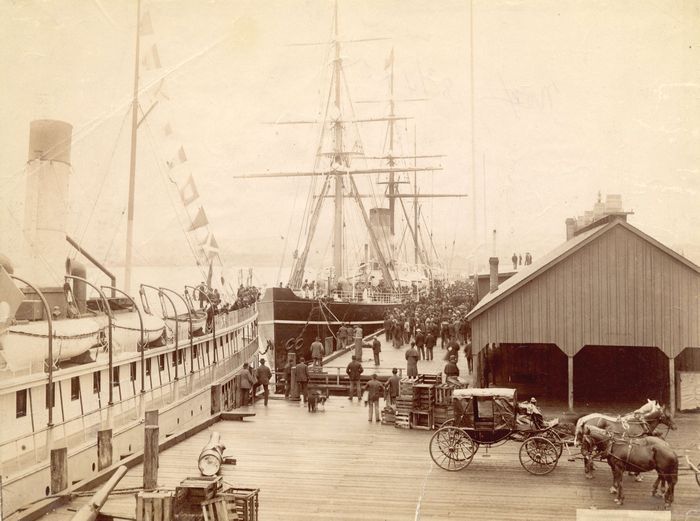 Queen Victoria never reached Vancouver during her 64-year reign. But her son made the first visit to the city by a member of the British Royal Family on May 22, 1890.

It was short and lasted less than a day. But the masses were excited and eager to catch a glimpse of royalty.

“Due to the overzealousness or stupidity of some individuals, the gate on the south side of the (yard) was closed, apparently with the intention of keeping the crowds out,” the Daily News advertiser reported on May 23.

“However, the crowd hated the attempt to lock them out and smash into the gate while they were standing on the pier.”

Prince Arthur was popularly known by his title, the Duke of Connaught. He arrived with his wife, daughter and entourage after sailing across the Pacific Ocean from Yokohama, Japan, aboard the Canadian Pacific steamship, the SS Abyssinia.

The Royals spent May 21 in Victoria and sailed to Vancouver early the next morning. The SS Abyssinia rounded Brockton Point around 9:45 AM and docked at the CP wharf, where a band set down God Save The Queen.

Mayor David Oppenheimer gave a speech on how Vancouverites “remain the most loyal and obedient servants of Your Royal Highnesses”. The Duke replied with his own speech, noting how he was “perfectly surprised to see the size of the buildings” in such a young city.

“He hoped that all prosperity would rest with the city of Vancouver, and the large province of which it was one of the most important cities,” the news advertiser reported.

Then the duke and co. went for lunch, rest and dinner at Hotel Vancouver. They slept aboard a special CPR train that left the next morning for a journey across Canada, on its way back to England.

There were two passenger cars on the train, the Saskatchewan and the Matapedia, along with a baggage car. Two members of the press had arrived from the east to write about Connaught’s journey across the Dominion, but were told by Connaught’s aide Sir John McNeill that it was “the Queen’s train” and that “no one, unless absolutely necessary , would be allowed to work with it.”

So the press had to wait for the regular CPR passenger train and catch up. The Vancouver World had poured out over the royal visit, but sarcastically noted on May 23 that “the Queen’s train, as Sir John called it, is terribly exclusive, and you can’t travel on it, you know.”

Prince Arthur was the seventh of Victoria’s nine children. He was born in Buckingham Palace on May 1, 1950 and spent many years in the British Army, much of which was in India.

He first came to Canada in 1869-70, when he served as a military officer in Montreal and helped suppress one of the Phoenician raids on Canada by sympathizers of the Irish Republic in the United States.

He made a second trip to Vancouver in March 1906 and was appointed Governor General of Canada in 1911.

In September 1912, he made a third trip to Vancouver, a three-day affair where thousands greeted him at the new Vancouver Court House (now the Vancouver Art Gallery) and at the opening of the Cambie Bridge, which was renamed the Connaught Bridge, in September 1912. his honor.

Several arches were erected in the city to greet him, including one from a forestry group that erected the original Lumbermen’s Arch on Pender Street near Hamilton. After his visit, it was moved to Stanley Park, where it stood until it rotted and burned in 1947. The current arch was placed in 1952.

The Duke of Connaught was Governor-General until 1916, when he returned to England. His name lives on in local events such as Connaught Park and the British Columbia Regiment (Duke of Connaught’s Own), the military unit associated with downtown Beatty Street Armory.

Another Canadian regiment, Princess Patricia’s Canadian Light Infantry, is named after his daughter.

The Duke was married to Princess Louise Margaret of Prussia and the couple had three children. But according to Wikipedia, he also had a long-term “relationship” with Leonie, Lady Leslie, the sister of Jennie, the mother of Winston Churchill. He died on January 16, 1942, at the age of 91.

Sign up to receive daily news from the Vancouver Sun, a division of Postmedia Network Inc.

The next issue of Vancouver Sun Headline News will be in your inbox soon.