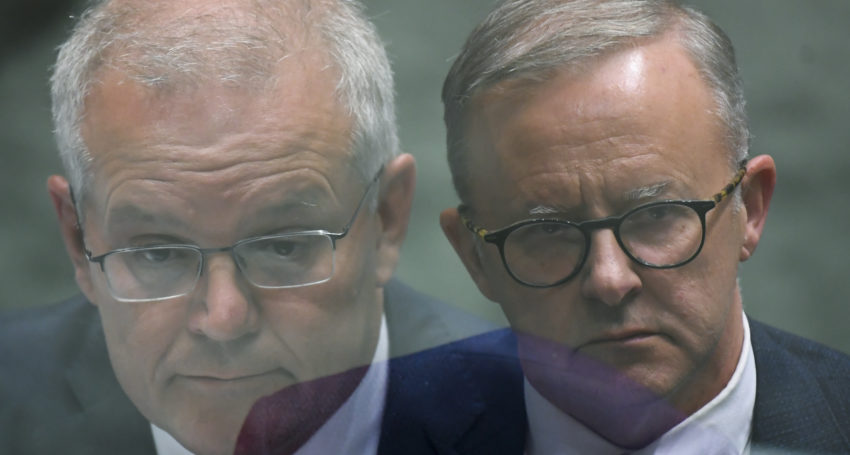 Thursday morning the text message came in from a woman who helps me with my horses. “And now I have to do that voting thing. Recommendations please? Who is the best?”

Well, Margaret, after an uplifting campaign, most of which you’ve spared, your choice could be a challenge. (Okay, I’m not answering your question directly.)

Maybe you hate Scott Morrison (large numbers of women do). But you know the line of the government and the Prime Minister has promised that he will listen and show more empathy if he is appointed for another term.

But can you believe him? Equally likely, once justified by the victory, we could see even more of the arrogance for which he is so widely criticized. And he has little idea how he would use another term. Just be the manager?

You might like Anthony Albanese better, with his “caring” pitch. But could he handle the job? He was capable enough as a senior minister. But it is a big step from opposition leader to prime minister. And he ran a very bad campaign, laced with misstep-ups (Thursday he erroneously said “our” [national] borders are closed”).

Understandably, Albanian has made Labor a small target after Bill Shorten’s experience in 2019, but that means we don’t have a broad sense of what Labor would do in the medium term.

If you were in a “blue” chair, Margaret, you could escape the Morrison V Albanese dilemma by voting for one of those very reasonable-sounding professional women whose priorities are climate, integrity and gender equality.

But you might worry about how another hung parliament would work (according to what you thought of the Gillard minority government). It would be an adventure into the unknown, with much depending on whether Morrison or Albanian led it.

This election comes when people are exhausted after the pandemic and deeply disillusioned with politicians. The campaign was plagued by noise and sledding. Spending promises to bribe marginal seats have been thrown around like confetti by both parties.

There are a number of policies in sight, but what’s missing are big ideas for the country’s future. Neither side has dared to talk about serious “reforms”. There is little that catches the attention of the betrothed, or even the betrothed.

When I contact Margaret, a professional rider, to ask if I can report her text, she says that politics “is just something I don’t focus on. It’s not part of my life – which is ridiculous, because it affects every part of my life.”

Margaret is one of thousands of voters in Australia who have postponed their decisions until the last minute. They are prime targets as the leaders make their late pitches, running from chair to chair. In some voters, voters’ decisions on the death blow can be critical.

Albanian and five of his senior shadow ministers — his deputy Richard Marles, Penny Wong, Jim Chalmers, Tanya Plibersek and Jason Clare — will have fallen between them in 20 marginal Liberal seats from Thursday to Friday.

Albanian (who has previously been criticized for the slow pace of his campaign) will be in South Australia, Tasmania and Victoria on Friday.

Unlike the late decision makers, millions of Australians have already researched COVID safety for the sake of convenience, or simply because they fear being over the election.

As polls this week show the competition is tightening, the last few days have brought their manic moments.

Looking for another photo opportunity, Morrison knocks a child to the ground during a football game; the boy later analyzes the details for the camera and says “it should have been a penalty”. In Kooyong’s green-blue seat, where passions have been running high for weeks, treasurer Josh Frydenberg films a verbal altercation between ‘blue-green’ money man Simon Holmes à Court and pension minister Jane Hume.

But the last few days have also seen some new economic data getting to the heart of this election battle.

The wage price index, released Wednesday, underlined how people are slipping in our now high inflation environment. It rose 2.4% over the year to March, when inflation was 5.1%.

This played out for Labour, which runs hard on the cost of living.

Then, on Thursday, the latest unemployment rate, 3.9% in April, bolstered the government’s mantra about jobs.

But the mystery remains. You would normally expect our very tight labor market to drive wage growth, but it hasn’t happened and there is no prospect of it happening any time soon. The Reserve Bank does not expect real wage growth, measured by the wage price index, before the end of 2023.

Albanian has indicated that Labor hopes the Fair Work Commission will give minimum wage workers a raise to keep them in line with inflation. Morrison, who is behind on wages, is trying to get it both ways. He says he wants to see wages rise, but finds the attitude of Albanians irresponsible.

Labor left the publication of its policy costs until Thursday, in fact as late as possible. It admitted it expected a scare campaign. But it’s been guessed that, with the deficits huge, a cumulative deficit of just $7.4 billion over the government’s $224 billion in the budget won’t be politically harmful. (The figure is $8.4 billion when factoring in a last-minute government cut announced this week.)

The opposition says the larger deficit is explained by investments in “key economic growth areas” of childcare, training and education, and clean and cheaper energy. In other words, Labor says it has a gap of only a few billion, and sees the extra spending as an increase in productivity.

But those same few billions are being used by the government to back up its claim that Labor cannot handle money. “I think Australians think $7.4 billion is a lot of money,” said Morrison (who spent an additional $30.4 billion in the March budget on payments and tax breaks).

This article is republished from The Conversation under a Creative Commons license. Read the original article.

Media diversity is under threat in Australia – nowhere more so than in South Australia. The state needs more than one vote to move it forward and you can help with a donation of any size to InDaily. Your contribution goes directly to helping our journalists expose the facts† Click below to help InDaily continue discovering the facts.