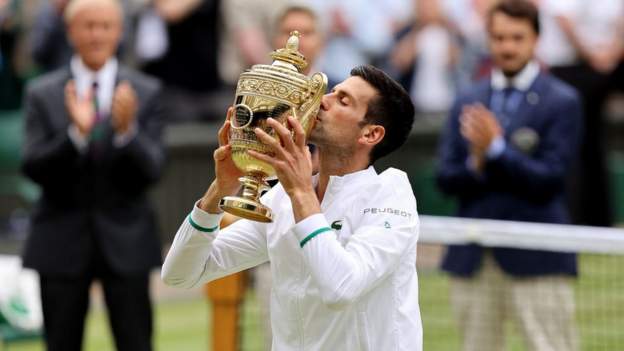 Players will not receive any ranking points at Wimbledon after the decision to exclude Russian and Belarusian participants from the tournament.

Players from the countries have been banned from all UK grass court events by the All England Lawn Tennis Club following the Russian invasion of Ukraine.

However, events outside Wimbledon, such as Queen’s and Eastbourne, will keep their ranking points.

“It is with great regret and reluctance that we see no option,” the ATP said.

The WTA speaks of a “difficult decision”.

The International Tennis Federation (ITF) will not award ranking points in the junior and wheelchair events at Wimbledon, which starts on June 27.

“The position we are taking is about protecting the equal opportunity that WTA players should have in order to compete as individuals,” added the WTA, the women’s board.

“If we don’t take this stance, we’ll be abandoning our founding principle and let the WTA become an example to support nationality-based discrimination at other events and in other regions around the world.”

In a statement, the All England Lawn Tennis Club expressed its “deep disappointment” and said it was considering its options.

It added: “We believe that these decisions are disproportionate in the context of the exceptional and extreme circumstances of this situation and the position we found ourselves in.

“We remain unwilling to accept that success or participation in Wimbledon is used to benefit the propaganda machine of the Russian regime, which, through its closely controlled state media, has a recognized history of using sporting success to promote a triumphant story to support the Russian people.”

The ATP decision means that Serb Novak Djokovic – the defending champion – will lose his status as the world’s number one.

Djokovic, a six-time All England Club champion, will not be able to keep the 2000 ranking points he earned by winning the title last year and is just 680 ahead of his closest rival Daniil Medvedev.

Announcing the move, the ATP said: “Unilateral decisions of this nature [by Wimbledon]if not addressed, set a damaging precedent for the rest of the tour.

“Discrimination through individual tournaments is simply not feasible on a tour that operates in more than 30 countries.”

It added: “We remain hopeful for further discussions with Wimbledon leading to an acceptable outcome for all concerned.”

Britain’s Culture Secretary Nadine Dorries wrote to ATP and WTA bosses earlier this week urging them “not to punish the AELTC” and said it would send a “completely wrong message to both Putin and the people of Ukraine”.

Shortly before the decision was announced on Friday, British men’s number two Dan Evans told the BBC he disagreed with the rankings being stripped.

“If we just stick to tennis and not politics, there should be points for Wimbledon,” he said in an interview ahead of the French Open tournament.

The men’s ATP events include Queen’s and Eastbourne leading up to Wimbledon, and there are three WTA tournaments in Nottingham, Birmingham and Eastbourne.

Ranking points are used to decide where a player is placed and whether or not they can gain direct entry into a tournament.

Wimbledon bosses consulted with the British government before the decision to ban players is announced.

The Lawn Tennis Association subsequently joined Wimbledon by banning players from domestic tournaments, but the stance has been criticized by a number of players.

Russia’s number two in the world Medvedev, also speaking at Roland Garros, said there were “a lot of mistakes” behind the decision.

The US Open champion added that he would accept the decision and would not have considered taking legal action to reverse it.

Players from both countries will be allowed to participate in the tennis tour, including at this month’s French Open, but not under their national flag.

“We should be playing for the ranking points at Wimbledon and it will be disappointing for me as a Brit if we don’t,” said Evans.

“I think the majority of players don’t think it’s ideal that the other players can’t play, but there should still be points at Wimbledon. In my opinion, they’re just trying to protect the Russian players by letting them play.”

“There are a lot of other people who are losing it because of a very small minority of players who miss the tournament.”

The ATP and WTA have suspended their combined event, which was scheduled to take place in Moscow in October.

The International Tennis Federation (ITF) has also canceled its events in the country.